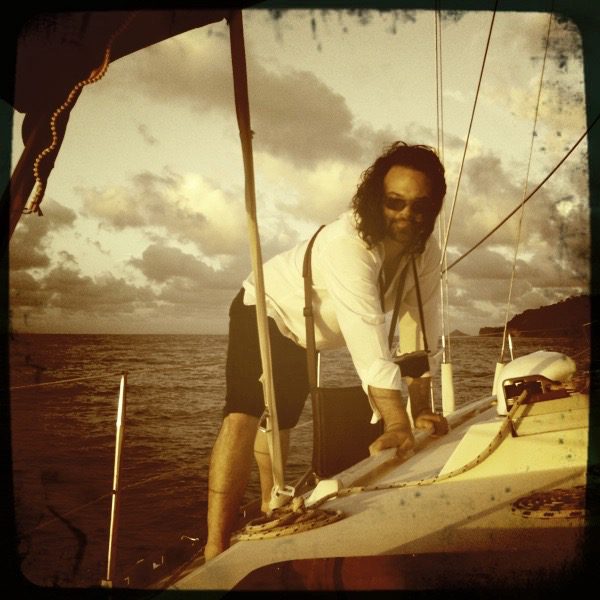 Twenty one years ago this weekend, a dozenish friends went to Burning Man. James and I were among them. We were not a couple; in fact, each of us was dating someone else. At the burn, I put my arms around him and gave him a warm hug. He turned and said "How are you doing that?" "Doing what?" I asked. "Making that green light in the middle of my chest," he replied. I was visualizing exactly that, sending love from my heart to his in the form of a green light. I was riffing off of something I'd been taught in yoga class, though I didn't think it was really real until that moment. Nothing was ever the same again.

This photograph is another pivot: December 28, 2010. We were in St. Lucia with James' parents on winter holiday, and my wonderful mother-in-love Charley had booked a little sunset cruise through the place we were staying, which would then arrange with local sailors for this to happen. A nice couple took us out on their boat and served us wine and cheese and crackers, and James got the bug, a turning just as entire as the one in which we saw each other anew and knew that we were soulmates.

May we ever dream, ever expand one another, ever embrace the wonder of the moment and our love. May we ever seek freedom, for ourselves and for all beings.

ten·der adjective showing gentleness and concern or sympathy. (of food) easy to cut or chew; not tough. verb offer or present (something) formally. noun an offer to carry out work, supply goods, or buy land, shares, or another asset at a…

WE DID IT: Sailing Out of the Golden Gate

Friday morning September 14 at 8:51 we cast off our dock lines from our berth at Marina Bay Yacht Harbor, which is where 'joice was when we bought her, and which has been our home base for the past year. A…