Walking back to my office from lunch with the team, Daniel elbows me and with his irrepressible grin points at the license plate of what he does not yet know is my car. "Do you think that guy is a Buddhist or a salesman?" 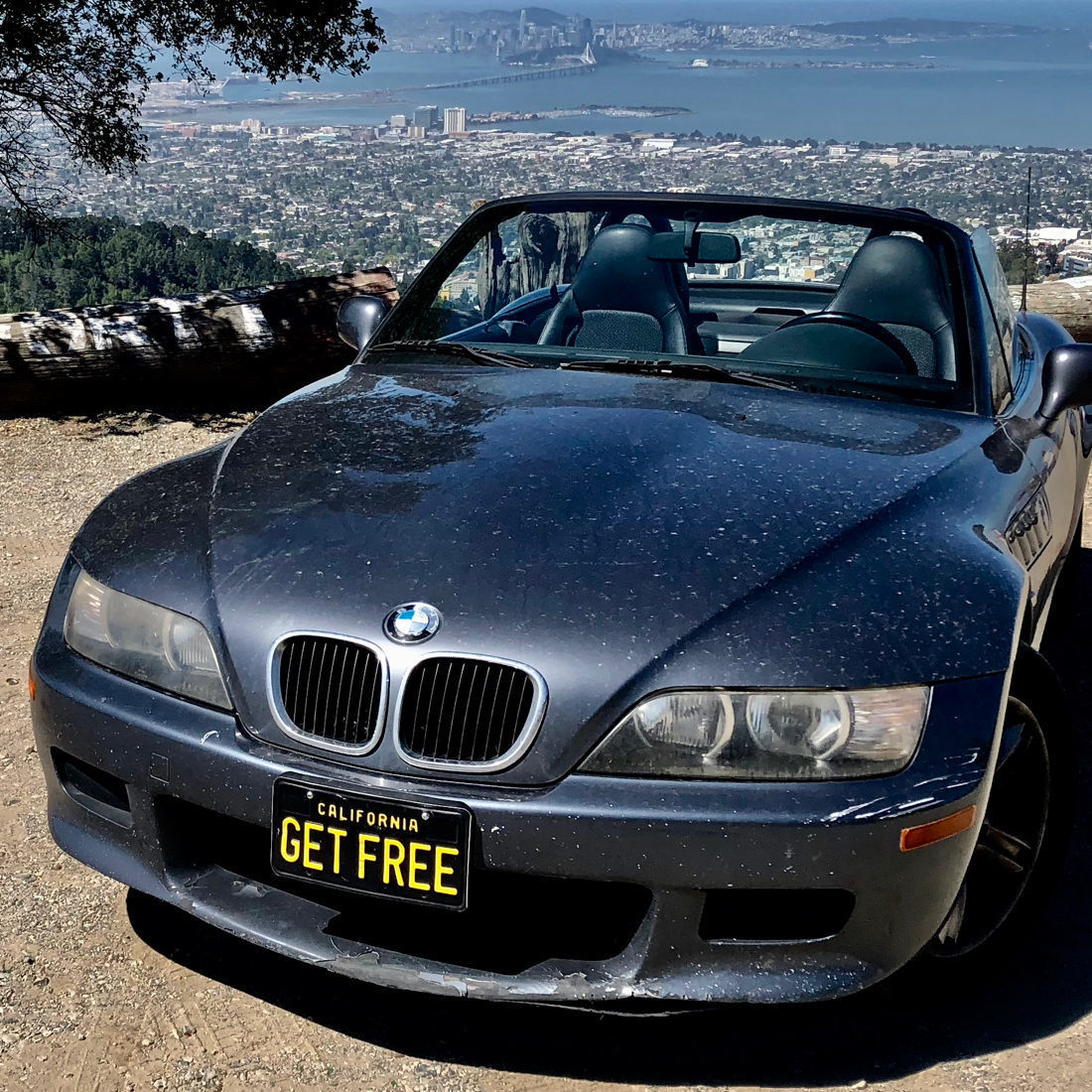 When we lived on land we had Lola. She was a beat up little BMW roadster that dear friends had sold to us cheap because her transmission sounded like a rock polisher. Dahlia had named her Lola ("because she's kind of a hot mess like the girls in the songs") before we finished the test drive. She had a lot of spirit for a car, and she practically demanded a set of personalized California black plates.

When I was a kid, we moved around a lot. I was car-obsessed. A monument to these two facts was my license plate collection. I eventually had over fifty of them, and I'd dutifully take them all down and put them all back up again every two or three years when we moved. The centerpiece of the collection was an original California black plate from 1966. To quote an old gonzo, "San Francisco in the middle sixties was a very special time and place to be a part of". The resonant echo of that time and place found its way to my 1980s suburban midwest latchkey childhood through books and magazines and movies and probably saved my life. Showing an understanding of historical talismans rare for a government agency, The California DMV reinstated the black plates as an option in 2015.

When we bought Lola, we were thinking really hard about what freedom meant to us. The decision to sell the house and go all in on Rejoice was still ahead of us, but we knew the road we were on wasn't taking us where we wanted to be. Dahlia's work had always revolved around the freedom found within through self-awareness, meditation, and daily practice, and that still seemed right. My work felt less right; I got started on the web in 1995 because I believed the ability to communicate with true freedom would help us all come to a better understanding of each other. Twenty years later, despite working hard to realize my best intentions, the platform we built seems to foster less freedom than distraction, anxiety, abuse, and deception, and that really broke my heart. My work had also afforded us a comfortable life, but the material beauty we had surrounded ourselves with felt more like it was holding us fast than setting us free. I felt less confident than ever that I knew what freedom meant to me, but I was going to figure it out.

When we bought Lola, we were also listening to a lot of Major Lazer. Get Free is a dreamy heartbreaking lament about how impossible the dream of freedom is for a whole lot of people. It ends with this bit:

We kept coming back to this. Today it hangs in Rejoice's saloon in the form of Fannie Lou Hamer's immortal words (rendered so beautifully by Rayo & Honey): 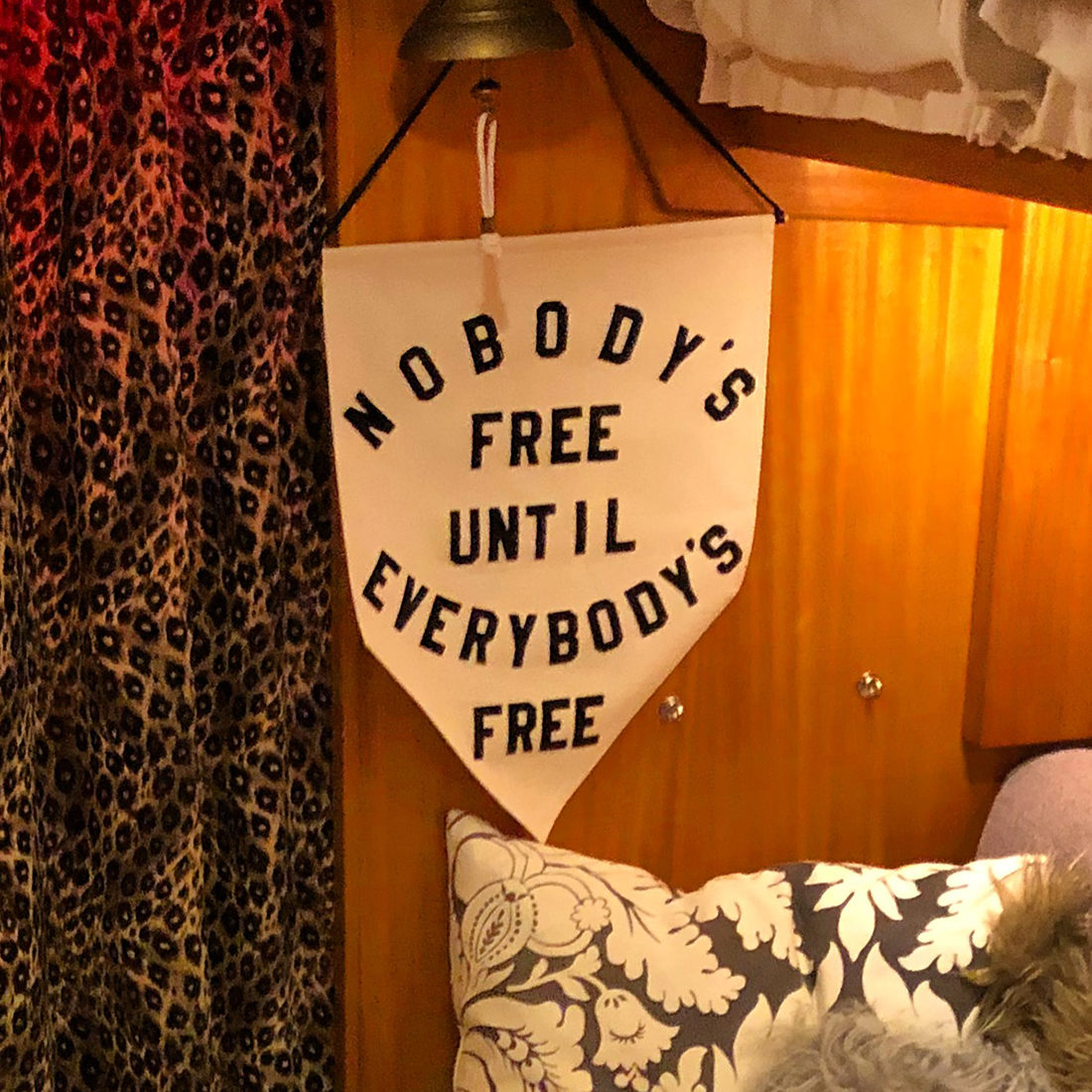 I definitely didn't expect GET FREE to be available when I typed it into the DMV form, but there was no question of choosing anything else when it was. It compelled people to ask us what it meant, and just like that, we'd find ourselves in these conversations with strangers about what getting free meant to them. We liked having these conversations so much that we named this website Getting Free to make sure we keep having them.

The salesman and the Buddhist inside me have never gotten along better.

The Nature of Existence: a Letter upon Love or Why ONE is Tattooed on my Wrist

One of my students, following the end of a romantic relationship, found themselves feeling horribly about themselves as well as heartbroken. Beloved friend, I once had a breakup that left my self-esteem feeling tattered in a way that was unfamiliar and surprising…

A Day in the Life

Fhis is what our days tend to look like right now. On the left is the overflow of James' project; he and his work are in the engine compartment, where he's replacing a whole lot of wiring to understand a system, chase…