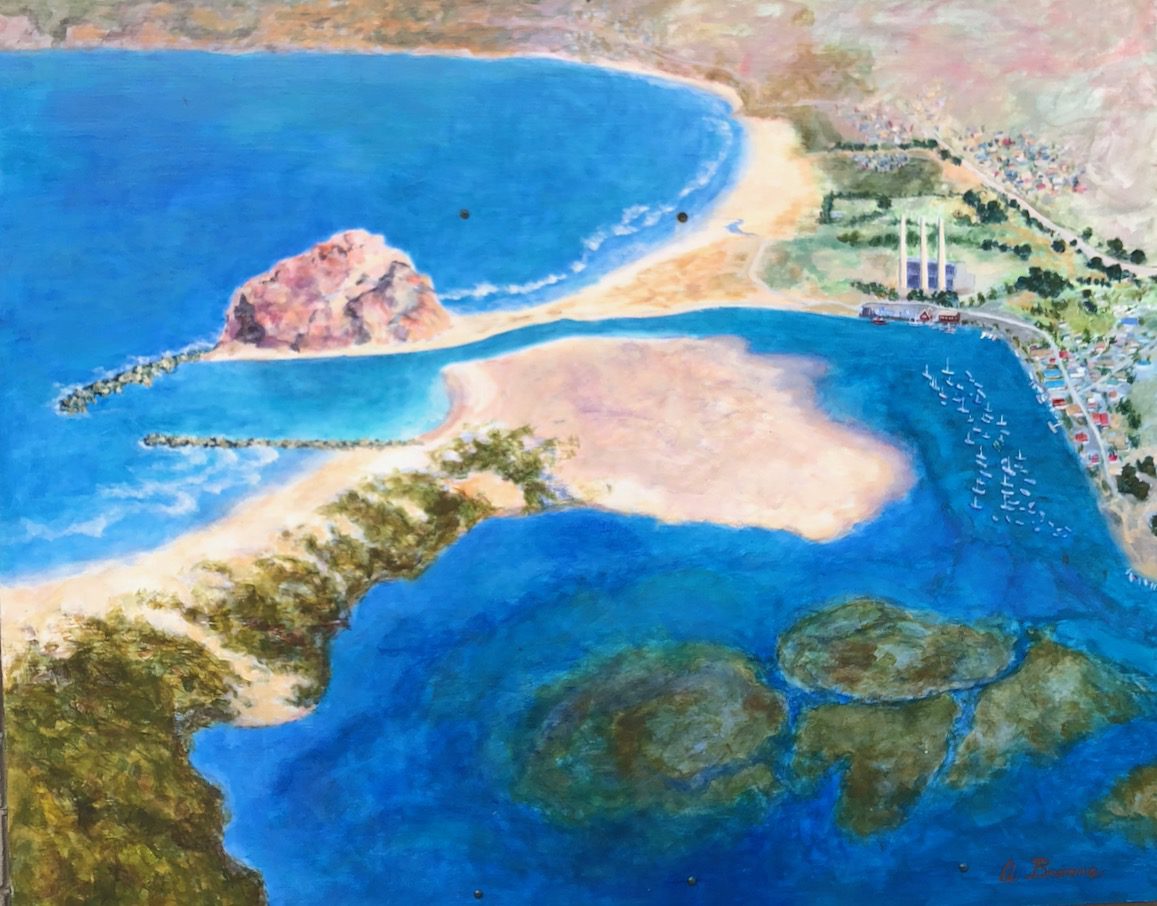 When one secures a boat, there are several ways this can happen.

Anchoring: You use your anchor! Because humans have been sailing for a very long time, there are resources that tell where safe anchorages are. When anchoring, it is necessary to consider the location of other boats and how they are anchored. The risk with anchors is that they can drag; fortunately, modern innovations in anchors make this less likely, and there are now GPS-based apps that will tell you if your anchor is dragging.

Mooring: A semi-permanent on-water parking lot of sorts, consisting of floating balls called mooring balls which are affixed to the seabed. You use a pole to take hold of a rope that hangs off the mooring ball, tie your boat to it, and probably pay a small fee. If you want to go to shore, you use your tender, a little boat that a bigger boat uses to get to shore. We have an inflatable dinghy named Delight who has a little outboard motor.

Docking: A town or a private company builds docks along their waterfront. You pay for the right to dock your boat there. This usually, in America, comes with access to shore power, water to fill your tanks, toilets, hot showers, and a washer and dryer (which cost extra).

When leaving Monterey, there isn't a great spot to drop anchor for a long while; it's a steep and wild part of the Northern California coastline. San Simeon is the first common spot to stop, but it's a seaweedy anchorage and it's tricky to fit the whole trip into one day at this time of year. We chose to aim for Morro Bay, a small town a few hours farther with a small bay and several small marinas with docks and mooring balls. We decided to leave Monterey on Saturday afternoon, spending the night sailing along the the coast, and arriving in Morro Bay on Sunday.

Now, if you're not a sailor, sailing on the open ocean tends to sound really dangerous and sailing near land sounds much safer. It turns out that there's a lot more to hit near land, so in darkness, the open ocean is a more prudent choice.

This was our first overnight passage, so we invited our friend Dan to come along as crew. If you read our departure story, you met Dan, his wife Jenifer, and their son Marco, who came in their boat to escort us to the Golden Gate. We also decided to buddy boat for the first time! Buddy boating is to sailing as caravanning is to road trips in cars. Blossom is a 1974 Formosa 41. 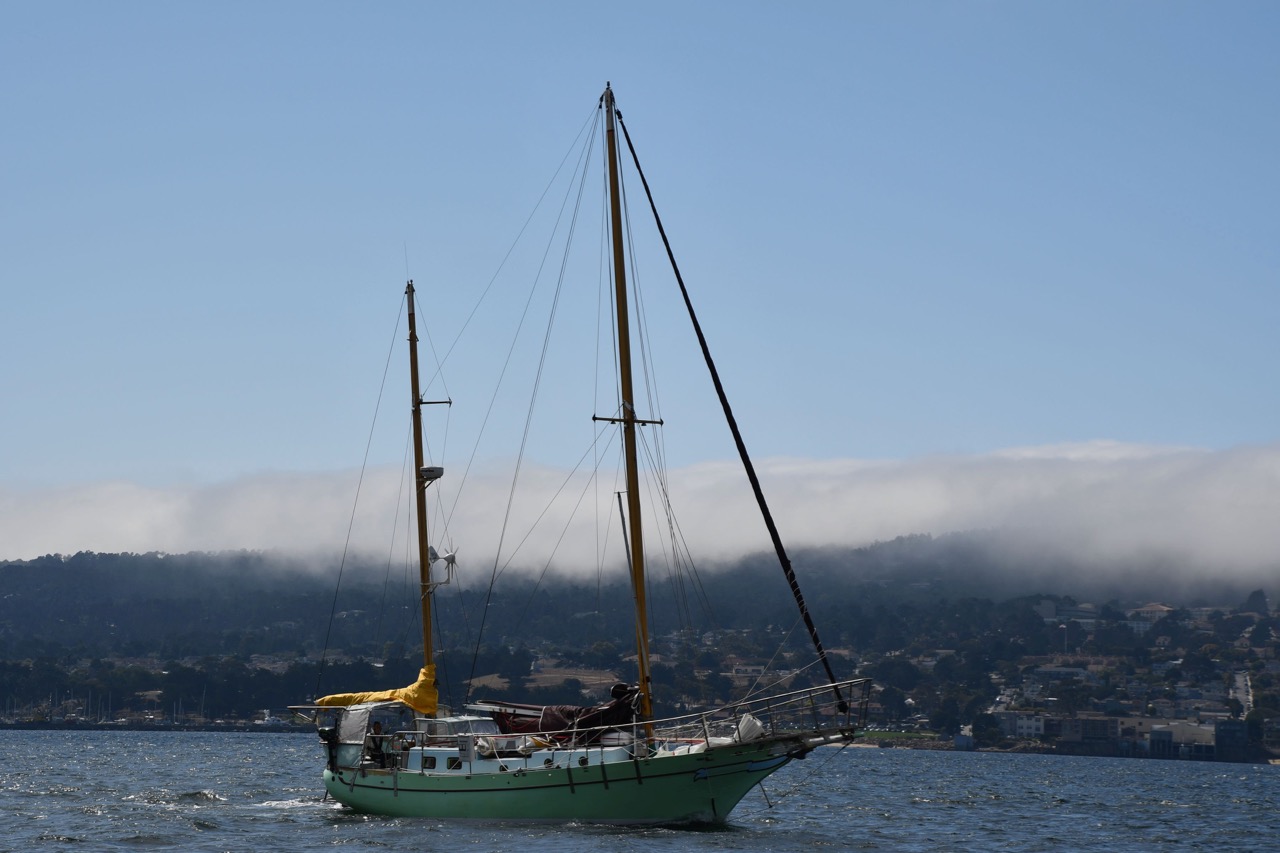 Last year, I saw a woman post to the amazing FB group Women Who Sail (WWS is 15k strong as I write, and moderated strongly for kindness); she was, like me, a yoga instructor and possibly heading to Mexico that winter with her partner, so I reached out and introduced myself to Sarah. Neither of us ended up feeling ready that season, though, and over the year, we stayed lightly in touch, texting now and then about our progress. Sarah and Charlie departed on SV Blossom a couple weeks ahead of us and spent some time anchored down at Pillar Point in Half Moon Bay. One night I was texting Sarah in the car as James and I headed to our favorite East Bay restaurant, Kiku, a tiny 12 table sushi joint. After we entered, I glanced around and thought "Oh, funny, I would think that woman was Sarah except I know she's in Half Moon Bay," just a moment before she came over to ask if I was me. They'd driven up for some errands and had stopped here, at their favorite place, where they had gone the night they got engaged. The kind folks at Kiku let us push some tables together and we shared dinner.

As we we've heading down the coast, Sarah and other women I've met through WWS share current local knowledge. Local knowledge is what sailors call that which can't be conveyed by charts, but only by experience. It was lovely to catch up to Blossom in Monterey! We spent a bunch of time together, clicked really well, and decided to share the next leg of our trip, which was going to be as long as the rest put together. We were all a little nervous, but the weather looked just right, with nicely spaced waves and 10-15 knots of wind, enough for a comfortable, moderate sail. The moon was also almost full, rising before sunset and staying up until 4:30ish; with first light 6:30ish, we'd only have two hours of full darkness.

Of course, the sea is always ready to surprise, so what we got instead was dense fog and heavy darkeness. My first night sail and my first sail in fog all at once! We were able to sail some of the night, but then the wind died and we had to turn on the motor. The drone of the motor, the waves, and the fog were deeply hypnotic. It was too dark to shoot at night, but after sunrise, it looked like this:

It was a very cold, very long night. 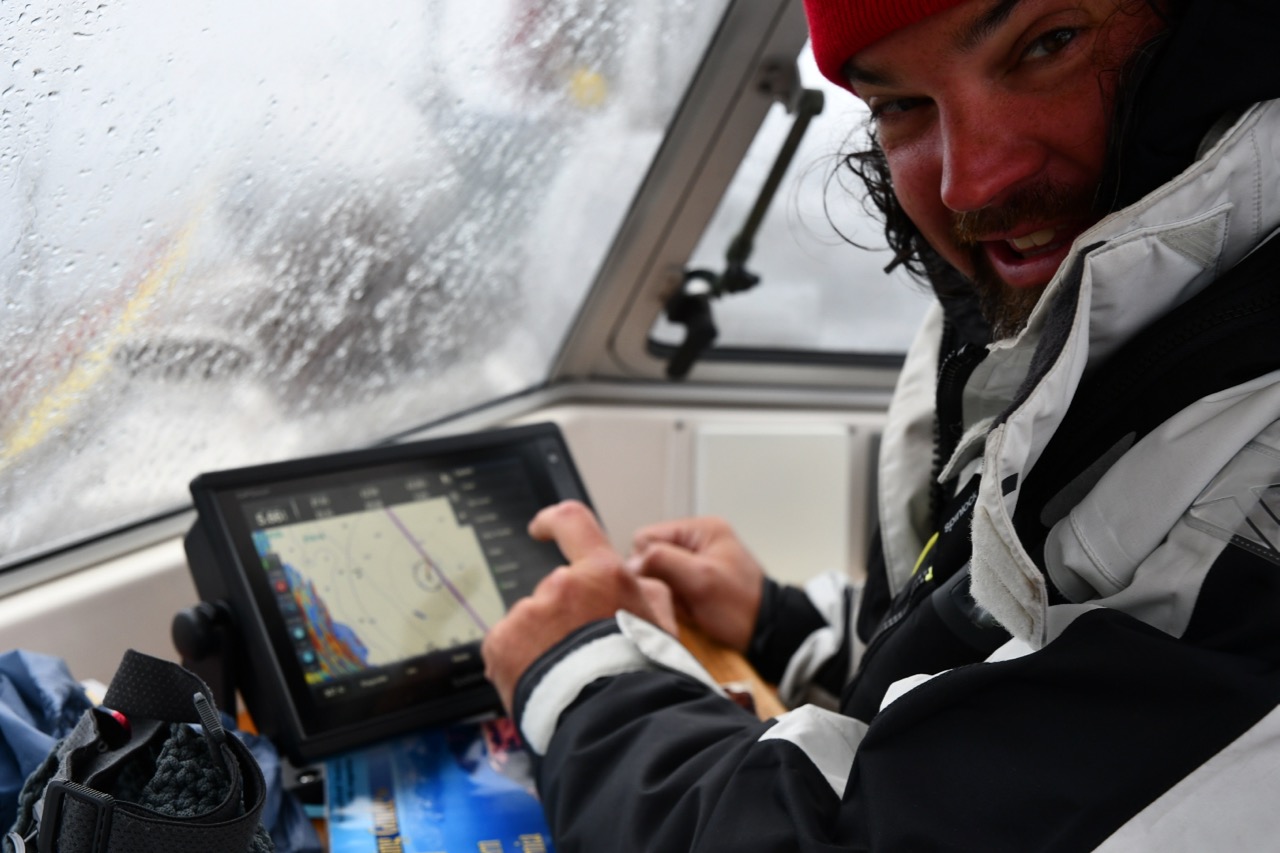 One ray of sunshine was using radar in earnest for the first time. Friends, we're still thankful every day for the chartplotter, which on this night and many others made us feel so much safer. 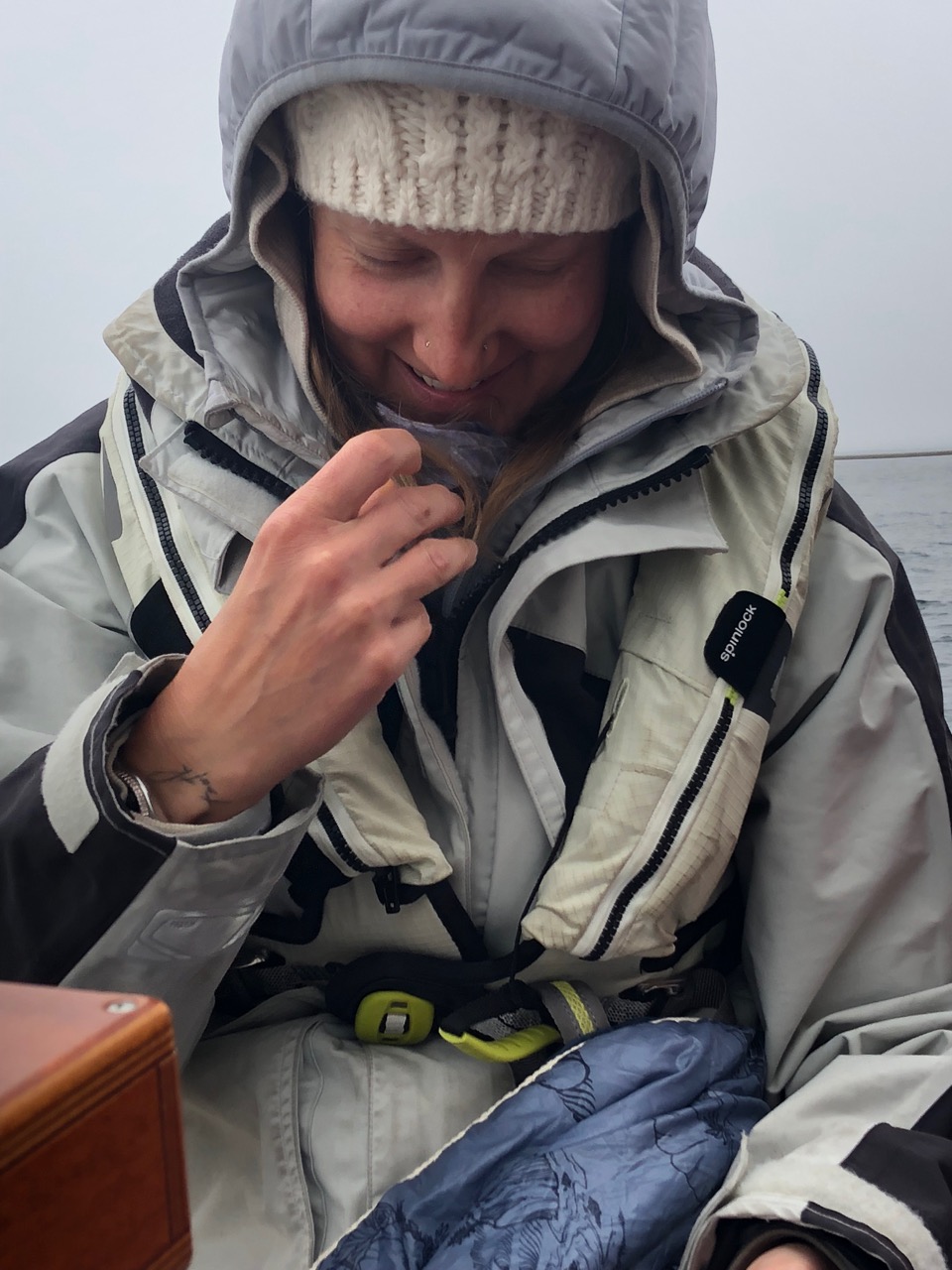 Charlie and Sarah did not have crew, and by sunrise they were very weary. They peeled off and dropped anchor at San Simeon in the morning. We carried on and arrived in Morro Bay in the early afternoon. This trip was absolutely worth every moment of inner challenge for the profound satisfaction of the accomplishment. One of the best things I have done. I thought so often of the words of the words of Sven Yrvind,"Comfort does not make you happy." 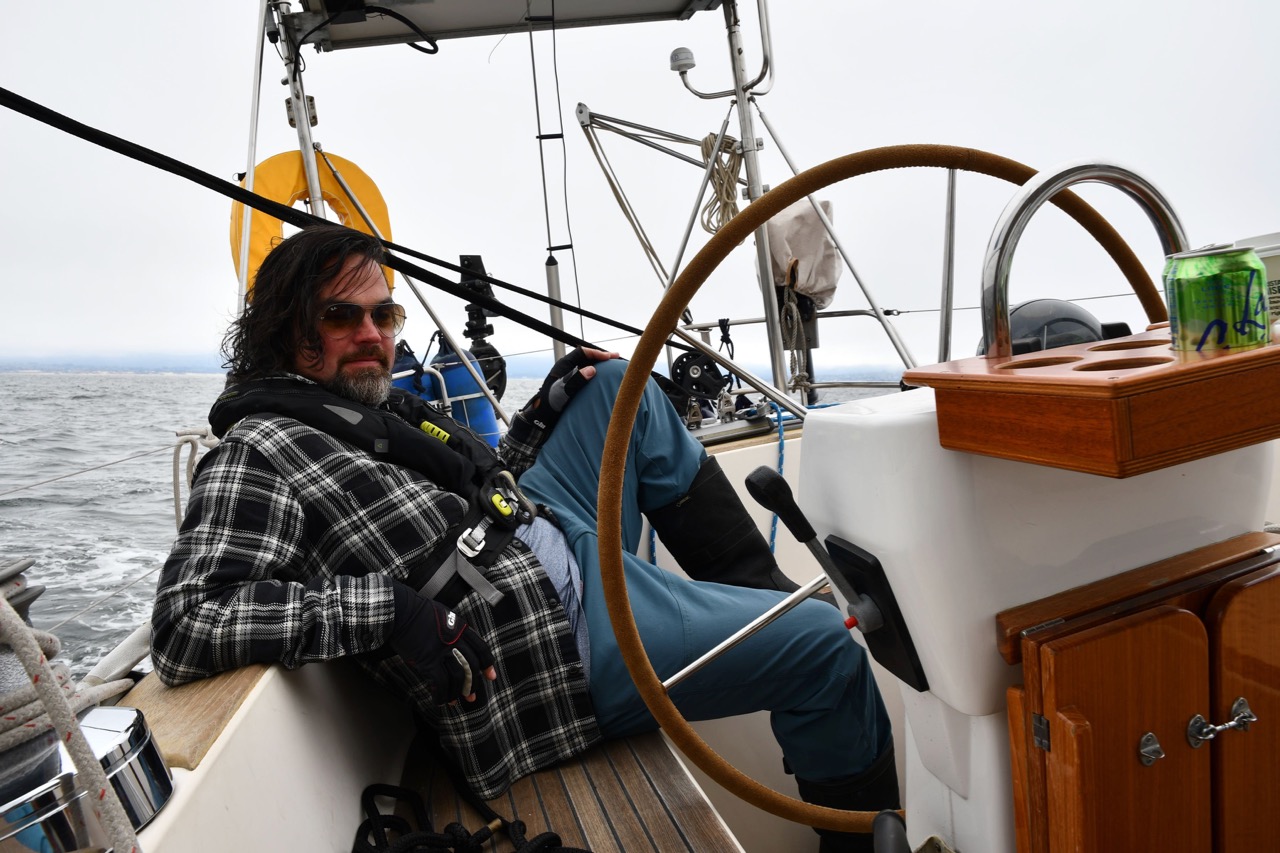 Pulling in after the sun rose, melting the fog and feeding our joy: 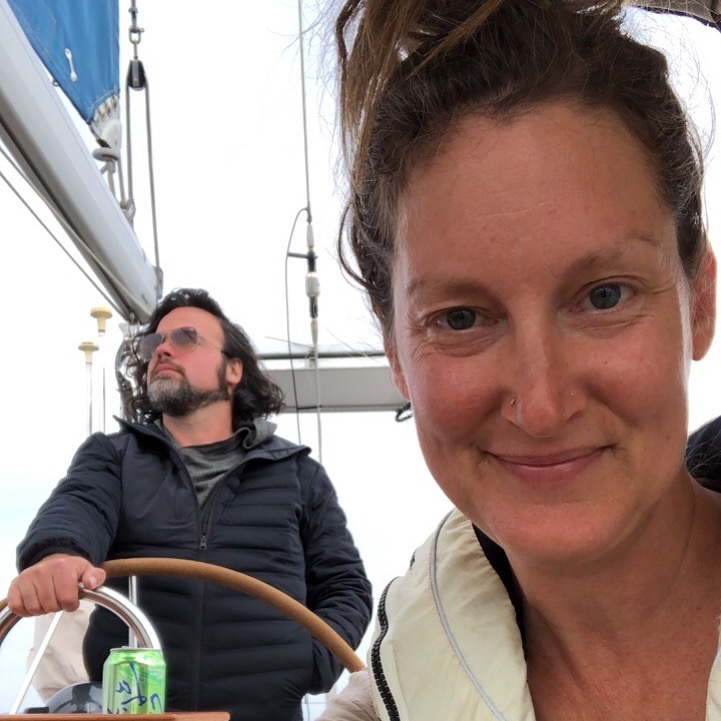 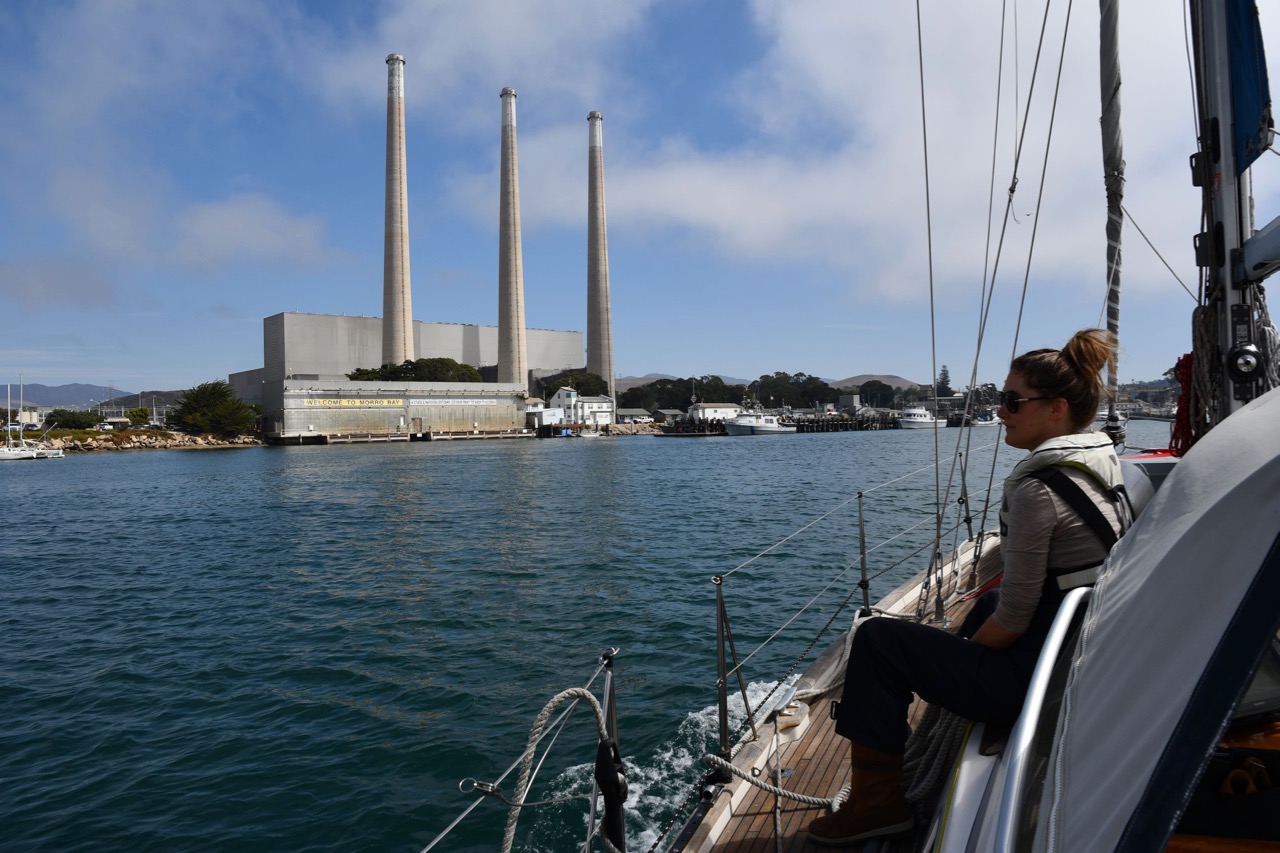 Love and thanks to Dan for the shots of Blossom, James lounging in the cockpit, and me with the stacks of the plant in Morro Bay. He had some lovely things to say about our trip on Instagram, too! WE LOVE YOU, DAN!

James and Dan and I went out for food after our 24.5 passage from Monterey to Morro Bay. I am REALLY looking forward to telling you that story, but it's in progress, and I want to tell you this one in…

Brian Fagan, in his canonical "Cruising Guide to Central and Southern California", says that this area has been "known since the ninteeth century as the 'Cape Horn of the Pacific'"; he then devotes two sobering pages to detailing…