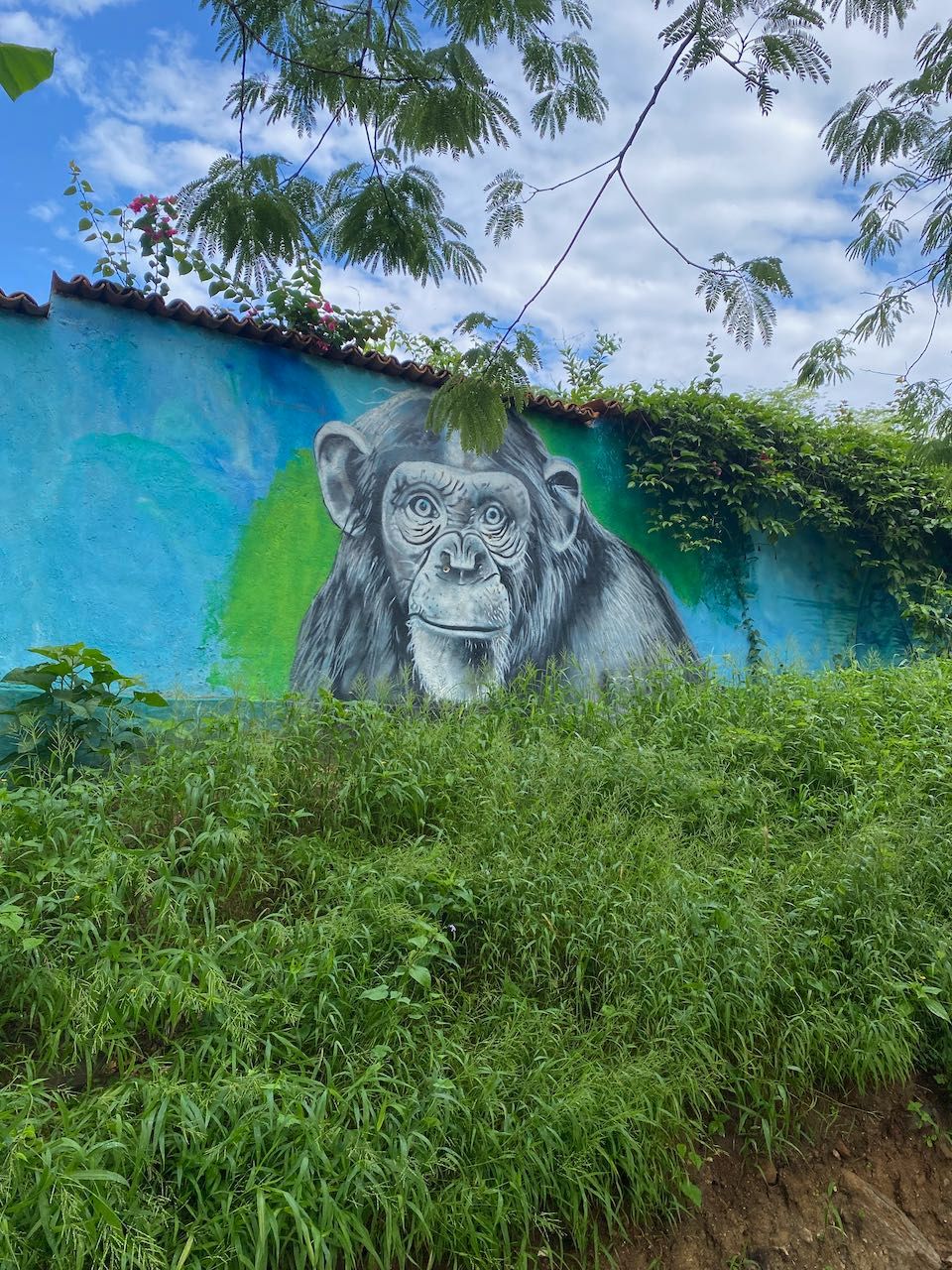 Last week, after a year and a half of being neighbors and coconspirators, James and I finally had dinner with Mike and Cat, an incredible local couple who are the heart of sailing in La Cruz. It was incredible to be physically close to friends again after so long practicing a loving distance!

And a few days later, we did.

Important spoiler: there are no monkeys on Monkey Mountain.

In the left image, the blue dot is us in La Cruz de Huanacaxtle. The red droplet is Monkey Mountain. I bet lots of you have been to the beach towns of Sayulita or San Francisco, also called San Pancho, just north of Monkey Mountain. In the elevation map in the rightmost image you can see two peaks south of Monkey Mountain; those are the two peaks in front of Cat and James in the center image. Yes, there are some horses ahead of us in the center image; there are tours that take folks some of the way up on horseback. You have to go on foot (and hand!) to reach the top.

The terrain is quite variable, making the hike demanding in places. The photos are only of the easy bits; I am not a getting out my camera while climbing an incline covered with slick clay mud kind of person – which makes me admire the ingenuity and skill of people who do it all the more! My hat is off to you, YouTubers! But yeah, my photos are the easy bits. There are also steep inclines covered now in the rainy season with the aforementioned slick clay mud. Some of the path is through dry riverbeds with many stones. There is some bouldering at the top and a couple spots that are only a few inches wide. There are ranches in the lower portion and some cows were grazing about. There were four of us humans: Cat, James, me, and our new dock neighbor Donna, who is really neat (she has lived on boats off and on since the 80's, spent 10 years in Japan, and gifted me that lovely black and white with rainbow colored umbrella image from the Summer Sailstice race). Our clothing was actually crusted with salt from our dried sweat that the end of the hike! It was magnificent.

The Ojo de Dios, or God's Eye, is a sacred art form, a traditional spiritual practice of the indigenous Huichol people who live in the Sierra Madre mountains; Banderas Bay sits at the foot of the Sierra Madres. I have been told that the Ojo de Dios is a form of prayer, a blessing, a protection. Thanks to James for this glimpse of the Ojos de Dios gracing the mountaintop.

The views from the top were exquisite. The pointy bit of land in the left image is Punta de Mita, which you can also see in the map above, leftmost in the first triptych in the post. Also, um, the captain has a monocular now and it turns out they are super handy! Plus: monocular jokes.

Thanks to Cat for the left image and James for the right, which is the tippy-top! I did not make it to where Cat is standing, as it's necessary to climb by hand and foot, which was a challenge I was up for, but the rocks were covered with an apparently-unusual and definitely-past-my-comfort-zone number of adorable caterpillars. She got on top and said, "Hey on the way up, watch out for that caterpillar. And that one. And that one. Oh." The adorable caterpillers were quite visually distinctive, which tends to mean I AM DANGEROUS in caterpillar. We did not know if they meant venomous (which is bad if they bite you) or poisonous (which is bad if you bite them), but they were very fast crawlers, so I decided right there was quite good enough. We looked them up later and they were poisonous, which made them not a danger unless we ate some, but I am still glad I left them to do their caterpillar thing. It was clearly a special time in the life cycle of the adorable, visually distinctive Milkweed Tussock Moth caterpillar, and I did not want to smush one just to put my feet on the tippy top. I wish you well, caterpillars.

It was incredible to be in the forest after having spent almost all of the past year shoreside. My body felt so deeply nourished by the deep green of the plant life, the rich scents on the moist air, and the glorious chorus of insect and bird communication. It was good to work hard and share a new adventure. Tremendous thanks to Cat for leading us on this journey.

I spoke too soon with my post about the magnificently absurd charity race here last week, as several more people have shared their documentation. Here's a little more art about it!…

Grounding Retreat 2021: As You Wish

Our 15th autumn Grounding retreat will be luscious, flexible, and easeful. We’ll be trying something radical: there are absolutely no requirements. I will offer a simple menu of delicious resources. You are welcome to enjoy whatever feels right for you, in whatever way your own heart guides you.…