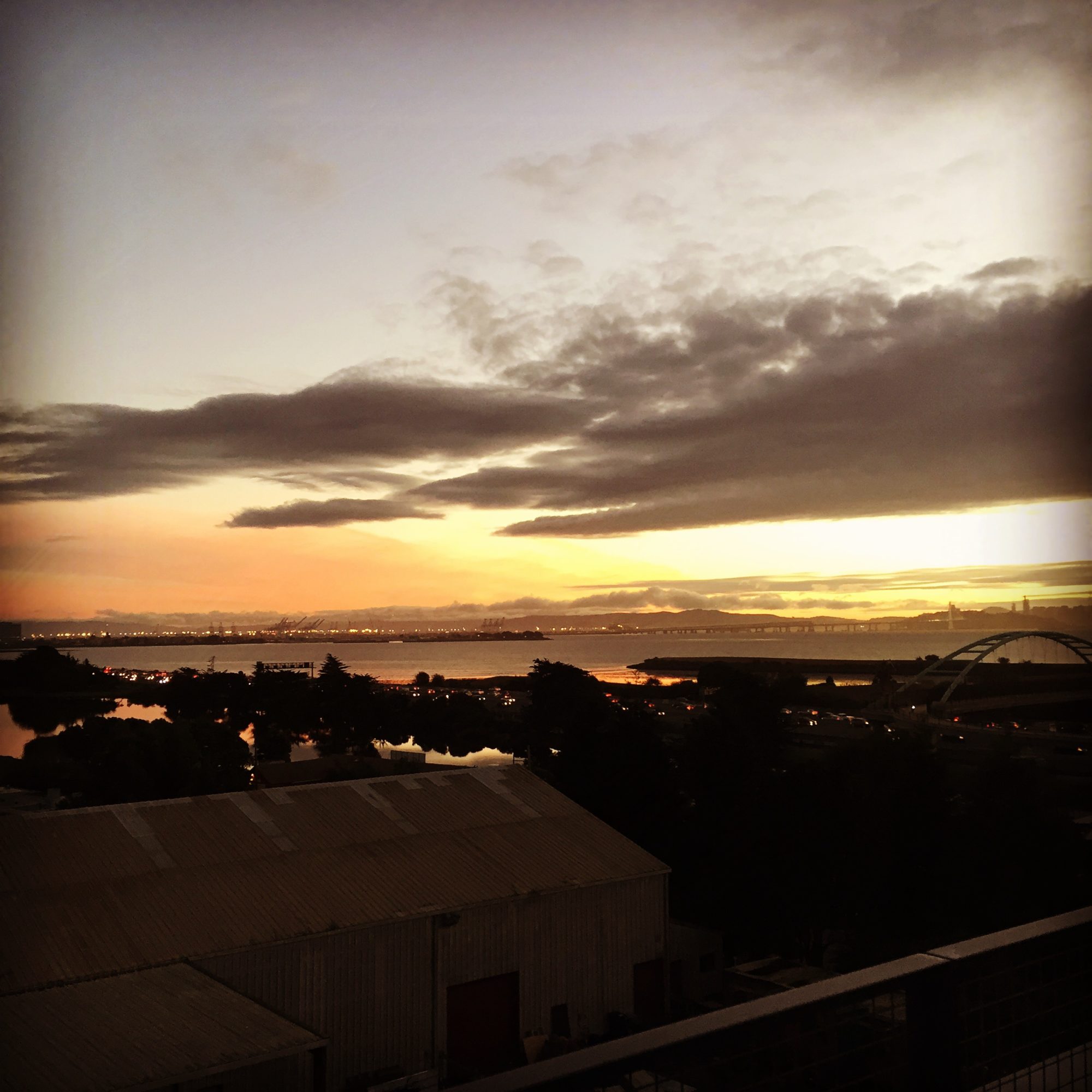 Last night we went to a talk at OCSC, our beloved local sailing school, about Blue Water Cruising -- which means crossing oceans for pleasure in a sailboat, as we aim to do. The couple giving the talk had spent three years exploring the Pacific in their boat. Near the end I experienced a wash of terror, very simple and clean. I’ve had waves of anxiety about our dream before, but I view anxiety as just a broken alarm bell, and so those I gently brush away with the skills I have cultivated in meditation. The terror was a different thing, a genuine emotion, so I stayed with it. It had an interesting quality; it felt both like a great blankness and had a rushing sensation to it. If I had to put it in words I think it would just be “ahhhhhhhhhhhhhhh!” It was nonverbal and unlike anxiety, there was no inner push to create a story. Just this big, blank, wide-eyed rush.

There is so much that I will need to know that I do not yet know; this is humbling, sobering, inspiring. Most people who do this have more sailing experience than we do, since we did not grow up with it. And we’ll be fine; we’ll dive in, be safe and careful, and learn as we go. People do that, too. It’s okay.

We left the talk, and as we unlocked our bicycles. I told James what was afoot. I said simply and clearly that I felt no differently about our dream, but was feeling a great wash of terror. He did not try to fix my emotion, talk me out of it, or get defensive about it. We biked home. I decided to cook us a little late something while James practiced knots. We had a good conversation, breaking through a few little stuck spots to strategize some of the big things that need to happen next. We curled up on the couch to watch Adventure Time, and I fell asleep right away.

This morning I woke with the sun at 6, which tends to be my body’s way. I curled up and read the comics. I could feel the fear in there still. I decided to go for a little run. I really, really, did not want to go for a run, and I put on my clothes and my trail-running shoes, and I went. I only got a wee bit before the tears came. One of my most beloved friends died last week. This was both slow and sudden; he died of cirrhosis. I saw this coming for a long time, but the end was quick, and came while I was out of town visiting family on the East Coast.

There is so much change. Nothing is forever. My friend said he wanted his ashes scattered in the Pacific, so far out they can’t wash back, so of course we offered to take him with us on the trip. His mother accepted this, and he’ll be coming with us when we sail. Oh, life.

I set out to run in new shoes. Light, meshy, uncushioned barefoot-esque shoes are a thing one is supposed to adapt to slowly for running. I set out for a small run beside the lake at Aquatic Park, gently, with intervals. I did not expect them to be intervals of jogging and sobbing, but that’s what I got, and I let it flow. At first I wiped the tears with my hand, but then my nose began to run, and soon enough I was taking off my t-shirt because I’d forgotten to bring a hanky, and there I was, a middle-aged woman jogging along in her running bra on a morning that wasn’t really warm enough for that, sobbing and blowing her nose on her t-shirt.

It felt awful, and beautiful. The ducks were dozing, standing in their usual spot, today with their beaks tucked under their wings. It looked so cozy, and I wished I could join them. But I plodded on, in my gentle sobbing kind of run. I went to the end of the road in the park, and I tapped the pole that blocks the path to cars as I looped around it and turned back the way I had come.

When I turned I was running into the breeze. It was cold on my damp skin. My feet were beginning to feel a smidge tender, and the place in my diaphragm where I’ve had repeated surgeries was beginning to shoot pains up into my shoulder and neck. The pain was annoying, and a gift; it gave me a focus, and called upon me to soothe myself. I jogged and walked and stretched and massaged my muscles where they wanted to tighten over the pain. I encouraged my body to stay soft over the pain, to accept it without resistance. Yes, of course. Perfect.

When I got back to the house, James was still asleep. I crawled into bed behind him, spooned him, and a last little wave of sobs washed over me. He woke a bit and sleepily said “Oh, honey, what’s wrong?”

“Just feeling a little griefy,” I replied, slipping my arm over him and my fingers through his. He squeezed my hand and we dozed. I rose a little later, clear and easy. My feet feel warm and a little throbby from the unfamiliar impacts, but safely so. The pain threading from the old wound is down to a little smidge in my neck, which I’m going to go soak in the bath. And the terror is gone. I know the grief will come and go in waves, but the current one is settled.

We never know. We think we know what a day will hold, what a life will hold, because there is so much that happens as we expect. But there is so much that we could never imagine. There is no such thing as entirely safe choices, and I don’t want a life that consists of them anyway. I want to make the most of being human. I want to embrace this wild adventure of being incarnate in this form. It makes sense to feel afraid at times. Fear is not bad, and having spent years now peeling down the layers to separate fear from anxiety, I know that fear is only a great, bright alertness. Fear makes us feel so alive. I have chosen to walk away from the life of routine and comfort. I have chosen to step toward bright sharp edge of fear.

We never know. We only think we know. Every day is a blessing. Today I am human again. So many people that I love are no longer here in this form. My love for them reminds me that we cannot know, and that life should be cherished and relished and eaten right down to the seeds.

This bit of backstory was written in May 2016. I like to think of myself as a practical, earthy woman. Upon preparing to downsize from the Edwardian flat in which I lived for 13 years, which had a closet in every room,…

Tools We Carry Onboard

I've always had strong feelings about tools, but on a broken boat in the middle of an ocean, they take on a new importance. I originally put this list together for Brittany from Windtraveler when she was trying to piece Scott's toolbox…