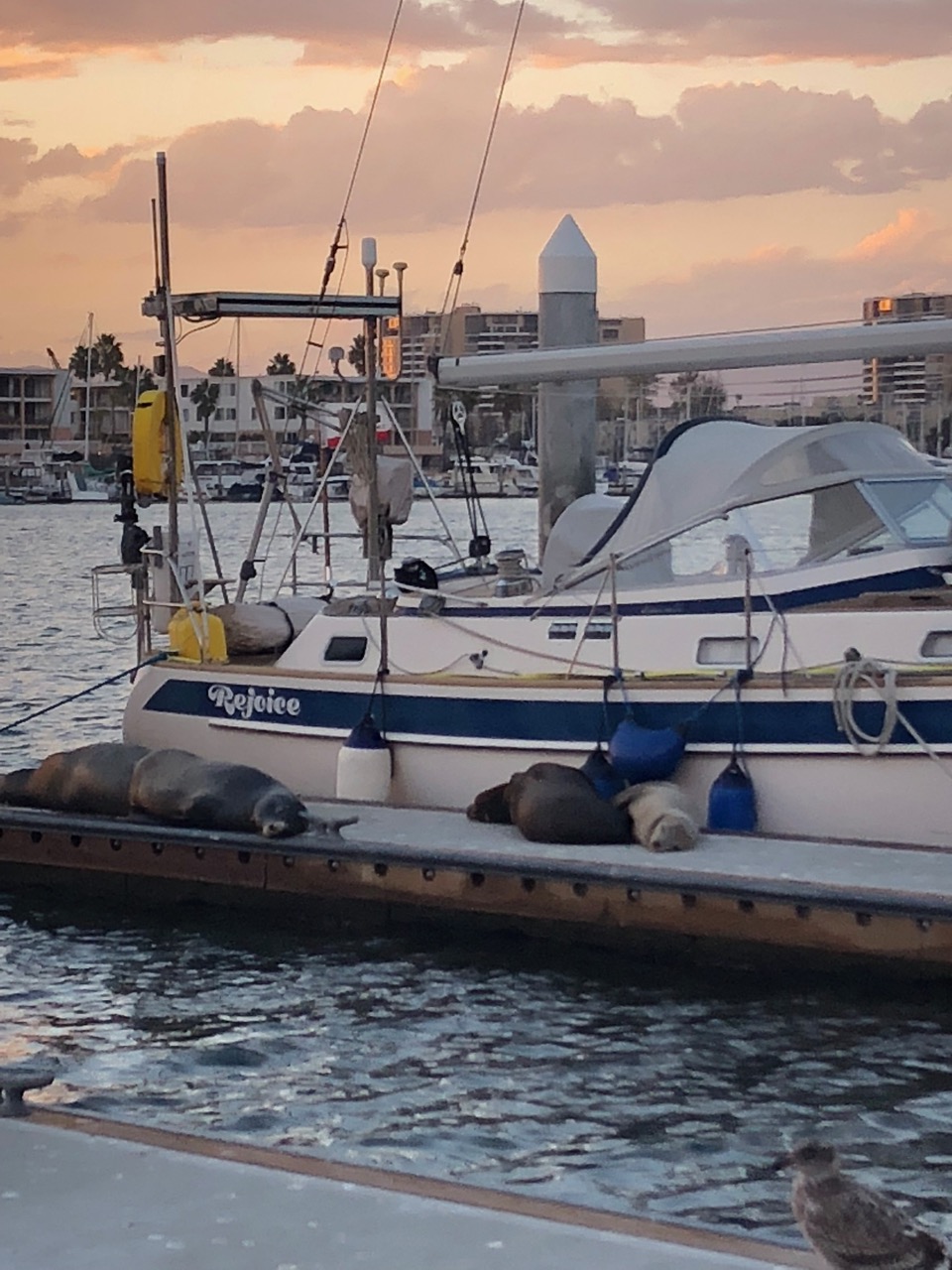 In Marina del Rey we stayed at the guest docks of Burton Chace Park. This was our first time at a park; we've docked at marinas and a yacht club, we've rafted and we've anchored. This was a little strip of guest docks along the edge of an urban park. Burton Chace was the mayor of Long Beach and then a longtime member of the Los Angeles Board of Supervisors. The construction of Marina del Rey, the second-largest man-made port in the world, was his pet project. The guest docks are right on the central channel, which makes them choppy (your boat gets slapped by the wake of every passing boat), but they have incredible views. The sunsets were glorious, and each night a gondolier came by with a couple nestled in his cabin. By our third night there, the gondolier and I were waving evening greetings.

Here is a tiny movie of us enjoying the sunset. The wee bright light in the sky at the end is the moon.

Los Angeles is the first place in a month of journeying where we spent an entire day wandering in town. We took a carshare to Venice Beach and laid for a while in the sand. James had been feeling a little eh (he came down with a cold a couple days later), so I gave him a massage. It was our first time flopping on a beach in the sun and it was a delicious bit of foreshadowing.

We walked all day! We meandered along the beach and enjoyed that odd frisson of visiting classic Venice Beach Boardwalk sites that I've seen in movies since I was a child. We wandered along the fashionable shops on Abbott Kinney Boulevard. We had organic Mexican food for lunch, good iced coffee and green tea, and a mediocre afternoon cocktail. The one thing we needed to buy was shirts, as the captain's favorite T-shirts have reached the end of their service life. I convinced him that this $25 vintage shop score was not too bright. (Yes, I DID grow up watching Magnum P.I.!) 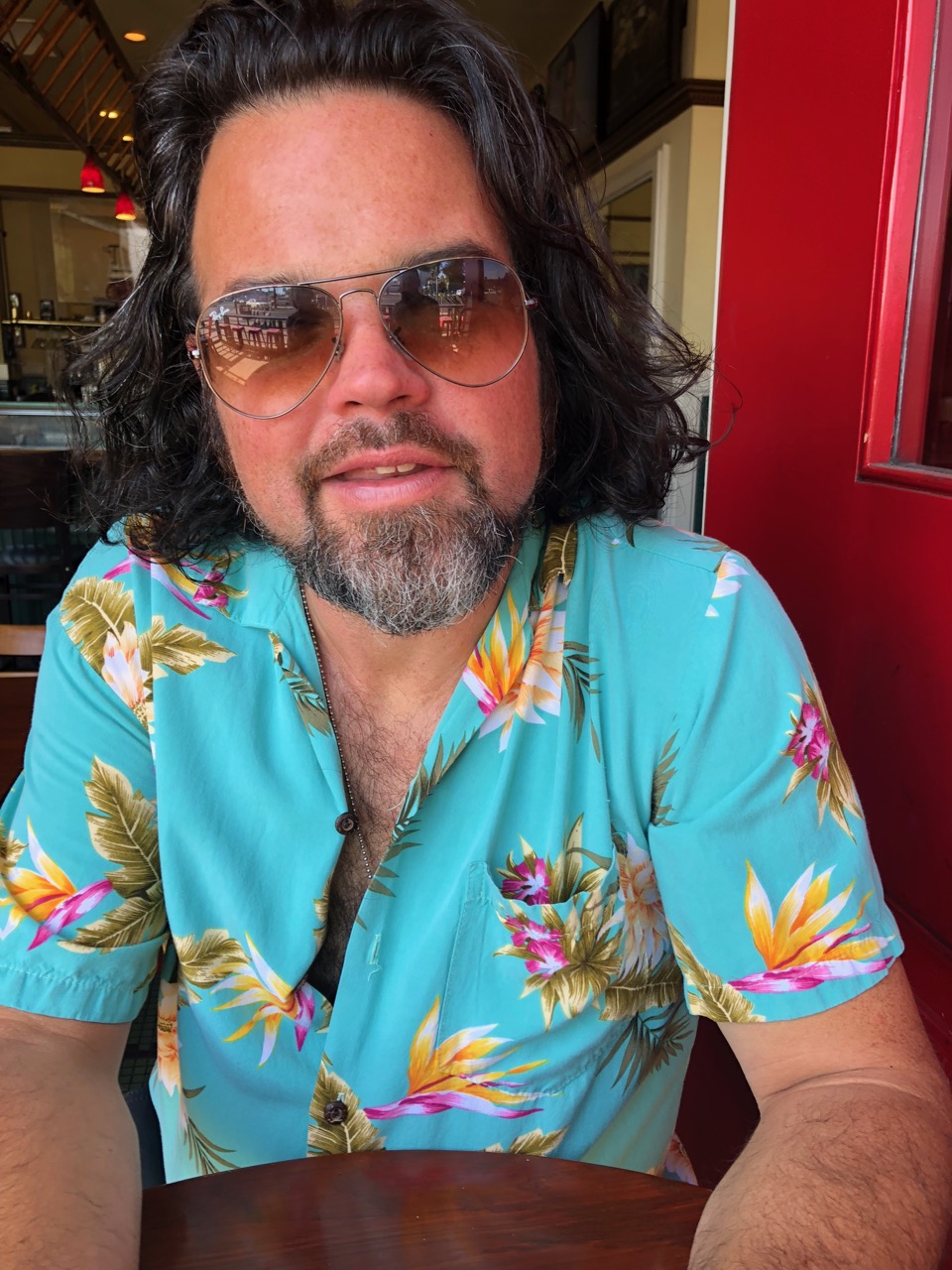 We arrived home just after sunset with aching feet and happy hearts to find the situation you see atop this post. That's four sea lions lounging on the end of our finger of the dock. They seem settled in for the night, already sleeping. Two adults at the end, and a mother and her cub RIGHT in front of the gate where we would usually step onto our boat. Boats are pointy to cut through waves, so the sides are curved. Our gate is positioned at the widest part of the curve so you can step onto and off of the boat with the least likelihood of falling into the water. Getting onto the boat at any other point means a bigger reach over water. We spoke with the sea lions for a while, but they showed no interest in moving. Eventually, we sidled up close enough to get our feet up onto the toerail (the wooden lip along the edge of the boat) and use the shrouds (the steel cables that secure the mast) to haul ourselves aboard.

We got into the cockpit and tried to convince the sea lions to leave. We spoke to them nicely. We pleaded. We spoke to them firmly. We ordered them off! I put some loud music on the cockpit speakers, which they seemed to find relaxing. I got out the shrill emergency whistle and nearly deafened myself, evincing only mild interest from the big mammals. James rattled the winch, banged on things, looked menacing, and waved our rescue ring over the side of the boat at them. Sea lions are doglike, and as we went through these measures, they barked, bared their teeth, and lunged a little. Now, a sea lion is not super agile out of the water, but they are massive and their teeth are huge.

Eventually, the two big sea lions at the end got sick of us and left. The little one was curious and seemed to want to either join us onboard or take off, but his momma was POOPED and CRANKY and she was NOT GOING ANYWHERE.

Eventually a third sea lion joined these two; it was much larger and shared my concern about our mutual proximity; it kept sitting up, alert, sniffing the wind and looking around. It seemed like the Poppa sea lion, as males are larger than females, and was clearly indicating that they all should leave. Momma was still NOT HAVING IT. I decided that cooking dinner was not essential with big mammals right outside the window over my stove and we settled in to a cold meal of charcuterie and stuffed grape leaves. The captain offered me a stiff drink, which I gladly accepted.

Then we saw some distant lightning. Electrical storms are rare in the Bay Area, so we have seen them only occasionally in the last 25 years. Lightning is also more intense when you are in your house which has a giant metal pole on it. Happily, the storm passed without incident and led the sea lions to decide the dock wasn't actually so cozy any more.

I did not handle this situation as calmly as I would wish; I fretted about the proximity of the giant creatures, but when James tried to shoo them off and they voiced their loud displeasure, I became frightened of that even more and begged him to leave off. I have, therefore, sought to learn about what I could do better next time. A park worker suggested that should I call the police if the issue reccurred which... is not my first choice. Fellow sailors at the dock suggested slapping ropes against the dock or turning the hose on the animals. Wise longtime sailor friends have since told us that sea lions seem impervious to noise, but that tossing ice cubes their way is good to move them along with minimal engagement.

I'd love to learn from others in the discussion if you have experience dealing with sea lions!

Once the realization is accepted that even between the closest human beings infinite distances continue, a wonderful living side by side can grow, if they succeed in loving the distance between them which makes it possible for each to see the other…

The Santa Ana winds were up, so we lingered a day longer than planned in Marina del Rey. James used the day to go to the banjercito at the Mexican Consulate to get the TIP (Temporary Import Permit) which would allow us…