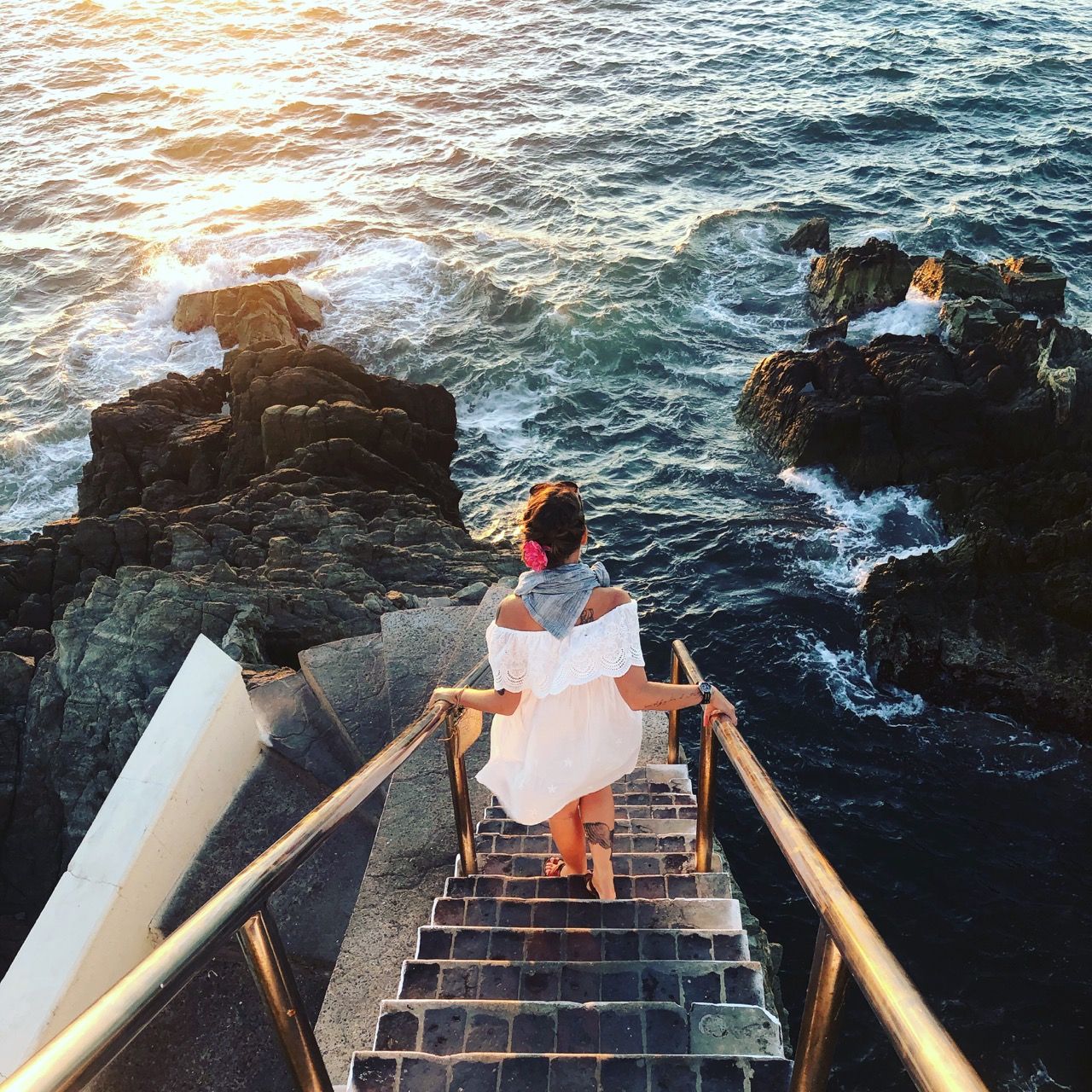 After we completed our work in the boatyard we decided to linger in Mazatlán; Carnaval was not far off and Mazatlán's Carnaval is quite famous, one of the largest in the world. Carnaval is a public celebration of indulgence that often precedes the austerities of Lent in Catholic countries, particularly in Latin America. New Orleans' Mardi Gras is a Carnaval festival. Yesterday we went for a meander, exploring the area where the main events will be held before it is packed with people, because James is filled with wise ideas. In the magic way of urban wandering, we stumbled upon something incredible while we were getting the lay of the land.

Clearly, this stone outcropping was the perfect place to view the sunset. It was unevenly built; some parts were gorgeous, some parts were slapped over with rough concrete; in some places something was clearly missing. James wondered aloud if we were supposed to be walking there, but it seemed safe enough as I explored the way forward, so I kept exploring forward. At one point the couple you see descending the stairs in my photo moved confidently and quickly past us speaking in Spanish, which was reassuring.

I arrived at the top first; Dahlia-who-loves-things-she-is-frightened-by-and-hurls-herself-at-them was driving. I felt so intense, this wild adrenalized apprehension and intensity. It was very odd, but I told myself it must be the setting: the tower is high, the edges not fully protected, and the waves were crashing powerfully along jagged jutting rocks all around. The view was exquisite, but when James reached the little summit, where I was sitting on an oddly sticky bench, which I was holding with both hands, I said right away, "I will not be able to stay here very long." He was so beautiful with the sunset behind him that I did manage to unpeel my hands from the bench to get out my phone to capture it.

We later discovered that we were atop the famous El Cladavista, the Cliff Diver, where people dive off of the cliffs as a show, earning tips from tourists. The bench was sticky because it was coated with salt from wet divers standing before their next jump.

The photo at the top of this post is by James, who when we reached the ground, announced with a very satisfied grin, "I've just taken one of my favorite photos of you ever." It looks staged, doesn't it? It was a candid moment, though. In that moment, I am walking very slowly and holding both rails because I am wearing sandals, because the approaching end of the rails and steep drop on the unprotected corner just ahead of me are terrifying, and because of the wild energy of the place. I am stepping very slowly and saying quietly aloud to myself, "I've got this. I'm okay. I've got this." The light is perfect, gold across the water, because I needed to come down before the sunset had finished; it was just so intense up there I could not bear it for long!

One of the things I have learned from many years of meditation is that my consciousness holds contradictory beliefs; different aspects of me hold different ideas that do not reconcile. (In my teaching, I refer to this as the chorus of the self.) My rational mind and ego do not like what they cannot explain. My entire body and my mystic's heart say here, though: the stone of that place is patently drenched with an energy that says both YES I HAVE THIS LET'S GO and OH DEAR HOLY EVERYTHING. Years and years of men standing there every day preparing to risk their lives, or watching as their friends do so. Fervor and terror, confidence and tragedy emanate from the stone here, and drew me both to to it and sent me from it powerfully.

As we were leaving, still unaware of any of this, a man approached us. He explained that he was a cliff diver, that they dive from that tower. He said that they usually only dive for a crowd. I smiled and said we'd be sure to return when there were more people about; it was quiet, the road was closed to automobiles for the Carnaval preparation. He looked about nervously and then blurted out that he would do it for ten dollars. I was so shocked that I could only stammer a polite decline. I am still struggling to integrate this experience in my heart; the danger seemed so great, and yet of course we all must eat. I will holding him and his comrades in my morning prayersong in the days to come.

In order to replace the seals and bearings on Rejoice's rudder, she had to be hauled out of the water. We were about due to repaint the part of the hull that is under water, so as long as we'd paid to…

The Loss of a Foremother

Today I sing for Carolee Schneeman, the glorious, ferociously incarnate, brilliant artist, who has left her body at the age of 79. "I guess my best advice is this: Be stubborn and persist, and trust yourself on what you love. You have…