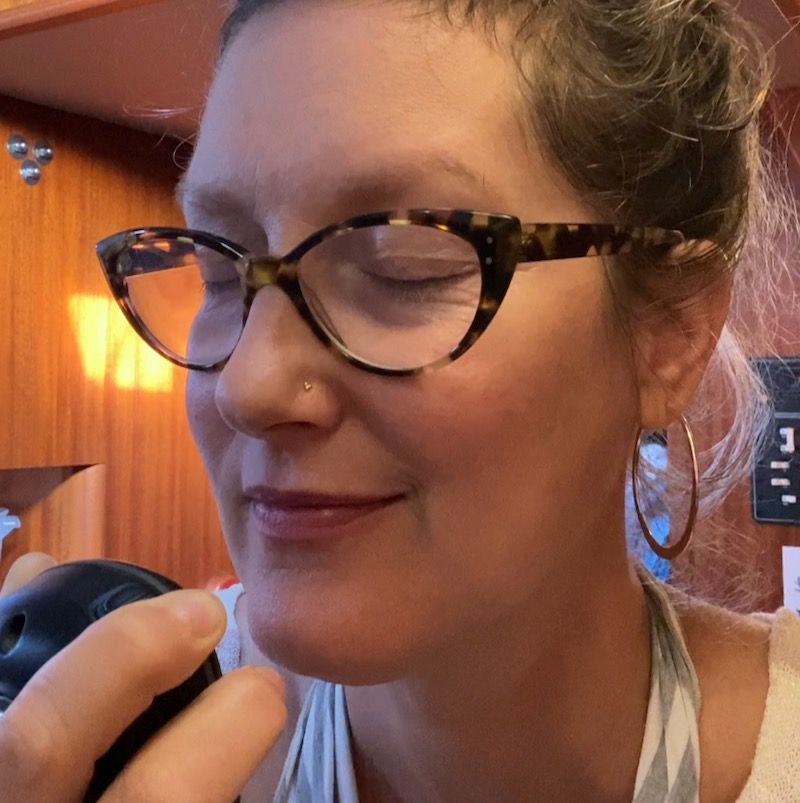 “Good morning, this is the Banderas Bay Net for Wednesday, (today's date.) Net control today is Dahlia from S/V Rejoice.”

These sentences are one of the bright spots of my pandemic year.

Boats communicate primarily by radio. Cell phones are relatively recent inventions and access to cellular networks is not universal. Ships have used radio for over a hundred years! We use them to communicate both on the water and in port -- Rejoice's VHF radio is on 24/7, even at dock, because the radio is used for casual communication, such as a neighbor checking to see if I am home or if they can borrow a tool or if I want to go paddling, and for emergency communication, like the sudden announcement last Sunday afternoon that an enormous (maybe 9' tall?) caution buoy had broken loose and was moving through the anchorage, then that it was wrapped around someone's anchor chain and hands were needed to keep it from bashing against that boat. Sailors were able to notify local authorities of the need for assistance and organize immediate aid in the meanwhile. We would have lost a ship had we waited for someone else to save us; with the help of our radio system, everyone was kept safe.

In ports frequented by cruising sailors (that's us!), VHF radio nets are common. These are a structured community meeting – it's like a combination of Craigslist, the local news, Nextdoor, and sometimes 911. Ours on Banderas Bay takes place at 8:30 daily-except-Sundays, and I'm the net controller on Wednesdays. It is, quite sincerely, one of the best honors of my life.

Let's hop back a ways, because I've been lax at keeping you up to date: in the fall of 2019, James and I picked up Rejoice in La Paz at the close of hurricane season and sailed her across the Sea of Cortez to La Cruz de Huanacaxtle, a sweet little fishing village. La Cruz is on gorgeous Banderas Bay, a few towns over from Puerto Vallarta. We planned to spend a month here and then go meander. Banderas Bay, however, is one of the most popular jumping-off points for crossing the Pacific to sail to French Polynesia, so local marinas compete for business by offering educational programs for folks preparing for that trip. We discovered the most amazing cruising curriculum, free, right here. And the Homes? WE LOVE TO LEARN. We took a series of workshops on evaluating and maintaining the health and tuning of our rig and sails, learned emergency dental care from a retired dentist, and practiced suturing on pigs with the local doctor. We took workshops on splicing line, weather forecasting, repairing your refrigeration system, and so much more.

James discovered racing, made some great friends, and together they took second in the 2020 Vallarta Cup – on the boat whose anchor chain had the buoy wrapped around it this weekend! At the season opening party I overheard someone ask if there would be yoga this year so I volunteered, which became free yoga M-W-F at the marina's waterfront concrete amphitheater.  Three months went by in a glorious flash!

We were starting to aim toward wandering on up into the Sea when the pandemic hit. All our friends were achatter! Many decisions were made. Folks who had a house somewhere else hopped on planes and went home. Some friends who live on their ships sailed back to the United States or Canada. Some friends who live aboard stuffed their ships as full of food as they could and headed away from shore. James and I thought long and hard – and decided to stay right where we were. There were intense events afoot. A boat at anchor in a remote anchorage was stoned by people who wanted outsiders to leave, a port we were planning on asked sailors not to come as they were struggling to get enough food as everyone stocked up at once; New Zealand banned pleasure sailing entirely to avoid the need for first responders to do anything but serve the pandemic. We were in a port where we were known and welcome, with a sound food supply, hospitals, relatively low hurricane risk, and a nonstop flight to California available an hour and a half away. We stayed with our ship, right where she was.

A year later, here we are. There's been good work on Rejoice, on each of us, and on our relationship. We look forward to wandering again once we are vaccinated, and we'll probably do this in California through Kaiser! For now, let's get back to that radio story:

The first 14 day lockdown hit in mid-March and suddenly I couldn't offer the yoga class which had been a sweet gathering point; we weren't even supposed to go outside for exercise here that first 14 days. I asked Katrina, (the powerhouse who organizes all the programs for the marina where we've been living and tons of stuff for the entire sailing community with a strong emphasis on community service) if perhaps it might be useful to have me lead a little meditation while we were all cooped up for a couple weeks. She loved the idea, so I began to lead 10-15 minutes of meditation most mornings, 10-15 minutes after the net. I'm just shy of a year of that most-days-daily practice now.

In the fall, one of the longtime net hosts moved back to the United States and I was asked if I'd like to commit to the Wednesday shift. I darn near exploded with joy! There's a script, and lots of radio norms to follow, but of course one finds space to be oneself in small ways, and it's great to be loving and have fun while serving the community. The radio is a powerful tool during and symbol of this year for me: how we stay connected when care calls upon us not to be physically close.

I love you, friend. Thank you for being here. I hope this brought you cheer.

Gathering for Peace and Courage

We’ll begin by tending to ourselves with loving tenderness: simple self-massage, gentle, seated stretching, and deep relaxation. If you choose, we'll continue by coming together for satsang, a gathering of spiritual practitioners for conversation. We will close with guided meditation.…

Best of this Week: Crocodiles and a Wringer

This little fella is named Galileo. He is two years old. Alfredo thinks he was born prematurely; he is blind and has bone deformities.... I close my eyes and remember the feel of Galileo's surprisingly soft tiny abdomen against my palms, swelling and contracting with his sweet little breath.…