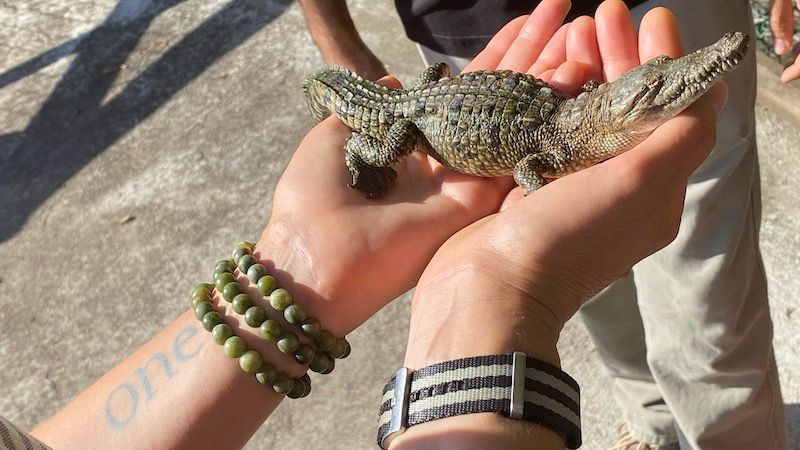 Most of our days are pretty mundane. We're quarantining at home just like you are. For us, that means working part time at our jobs, working on improvements and repairs to Rejoice, and the ongoing everyday work of boatlife.

One of the tasks I spend a lot of time with is laundry. This marina doesn't have machines; instead a woman in town offers a laundry service. I send our sheets, towels, and rags to Sonia and wash our clothing by hand. I got the washing side of that dialed before we left for cruising, so washing was going great for me. Wringing every item by hand four times (one wash, three rinses) was not okay, though; my hands, wrists, and elbows were telling me I needed a new plan!

I researched and decided a crank-style hand wringer was the solution for us. They are $150ish in the US and a lot more here, but I thought, "That is exactly the kind of thing folks often buy and then don't use, like juicers and elliptical machines." So I posted in the local sailors' swap meet group online asking for one and voila! I found the exact one I hoped for, third-hand and $50.

A prior owner had taken off the clamps and bolted the wringer onto a board, which didn't work well at all. James made a clamp setup to attach it to a bucket. That was better, but wobbly. This week he did version two, which was better but not steady enough yet, so then the next day he did version three. It's fantastic! It makes me feel so loved and appreciated. The wringer now has a foot strap I use to stabilize the bucket. The dowel adds stability and gives me another handhold. The wood is a lovely local hardwood called parota that James used for varnish practice. When he showed me the finished product, I asked if he could add one of the Rejoice stickers we use on good gear, and he put it on immediately. I am so happy with this new addition to our everyday, and so is my back and arms.

I know, I can hear you: "YES THAT IS VERY NICE BUT I AM HERE FOR THAT BABY CROCODILE!" I'm almost there! Just trying to be balanced. If I only post photos of the fun stuff, then y'all get the impression we're lazing about drinking margaritas and frolicking with charming miniature crocodiles. In reality, the majority of our time is spent working hard on everyday living, so I'm trying to give an honest impression of our life. It does include a lot of delight with nature, so let's get to those crocs!

Friday we got a rental car (you just ask at the marina office and the rental company sends someone with one for you!) to visit Rosalind and Don from Ramble on Rose, who we met our first season and went to Carnaval with in Mazatlán. Don woke up with a cold, though, so suddenly we had a rental car and no plans. We decided to go visit a local animal sanctuary. During the summer rainy season, a crocodile ended up in our marina. These are common in other marinas on our bay, but had not been in ours in the past. Crocodiles eat birds and fish, and you do want to watch out for cats and small dogs on the docks, but humans are not the kind of prey they are seeking. Still, folks were nervous, so our amazing friend Cat who runs programs for the marina started organizing groups to visit this local sanctuary, increasing education and understanding. We had not gone because the trips are in a van, which is outside our Covid comfort zone, but here we were with a car, so: adventure time!

The El Cora Crocodile sanctuary used to be a restaurant. Story is that the owner had a lot of caged animals and three crocs who were very friendly; I assume he raised them. They were used to being petted and fed by humans and this was a big attraction at the restaurant. A wild croc broke into their enclosure, however, and killed them. The restaurant shut down. Now the property is owned by a charming pair of young men, a veterinarian and marine biologist. They have a variety of animals: some birds, a peccary, some squirrels, a coati, and of course: crocodiles.

To get there, we followed a sign off the highway that turned onto a deeply rutted one lane dirt road.

At one point, the road was blocked by a truck. In front of the truck was a three foot tall pile of rough debris: hunks of concrete and dirt with plastic and odds and ends mixed in; I imagine it was trash from a construction site that made good free fill. A man was raking it and gestured for us to wait. We chilled while he raked the debris out across the road, filling one of the big ruts, and two little boys watched from the back of the truck.

At El Cora we were greeted immediately by a lot of beautiful chickens, including a few very opinionated roosters, glared at ominously by a black vulture, and then a friendly human showed up and said that the tour would begin in five minutes. We had Alfredo the veterinarian all to ourselves! He and his friend the marine biologist are passionate about animal rescue, local wildlife, and education. Most of their animals are brought in because they are found injured or have been kept as pets. Alfredo and his friend doctor the animals, releases those who can safely be set free, and cares for those who wouldn't be safe in the wild. At the moment there were two more young people, a vet and a marine biologist in training, who were working at El Cora as interns.

And then, the moment we've all been waiting for: BABY CROCODILE. This little fella is named Galileo. He is two years old. Alfredo thinks he was born prematurely; he is blind and has bone deformities. He will spend his life at the sanctuary, and people are allowed to handle him so he's used to that. Alfredo imagines in time using him to teach other vets how do crocodile examinations. There is a pair of healthy full grown adult crocs in a big habitat at the sanctuary who are being bred, and a couple of small healthy babies that we were not able to handle; they need to stay wild so they can be released to live good lives and protect the health of the bay's lagoons.

At 51, my memories are not all as sharp as they once were, so I have developed a habit that I think of as "polishing my memories": drawing up treasured moments to cherish them, keeping them sharp and bright. I've been doing that over and over with this moment from Friday: I close my eyes, remember my palms extended and the feel of Galileo's surprisingly soft little abdomen against my palms, swelling and contracting with his sweet breath.

May he have a good life. May he remind me that every creature is just doing their best to live. And that what transforms fear is curiosity, seeking understanding, and love.

On the Radio, Whoa-oh-oh-oh

"Good morning, this is the Banderas Bay Net for Wednesday, (today's date.) Net control today is Dahlia from S/V Rejoice." These sentences are one of the bright spots of my pandemic year.…

One Revolution of the Earth Around the Sun

Today is the one year anniversary of my quarantine. HOT HOLY JELLY DOUGHNUTS!…