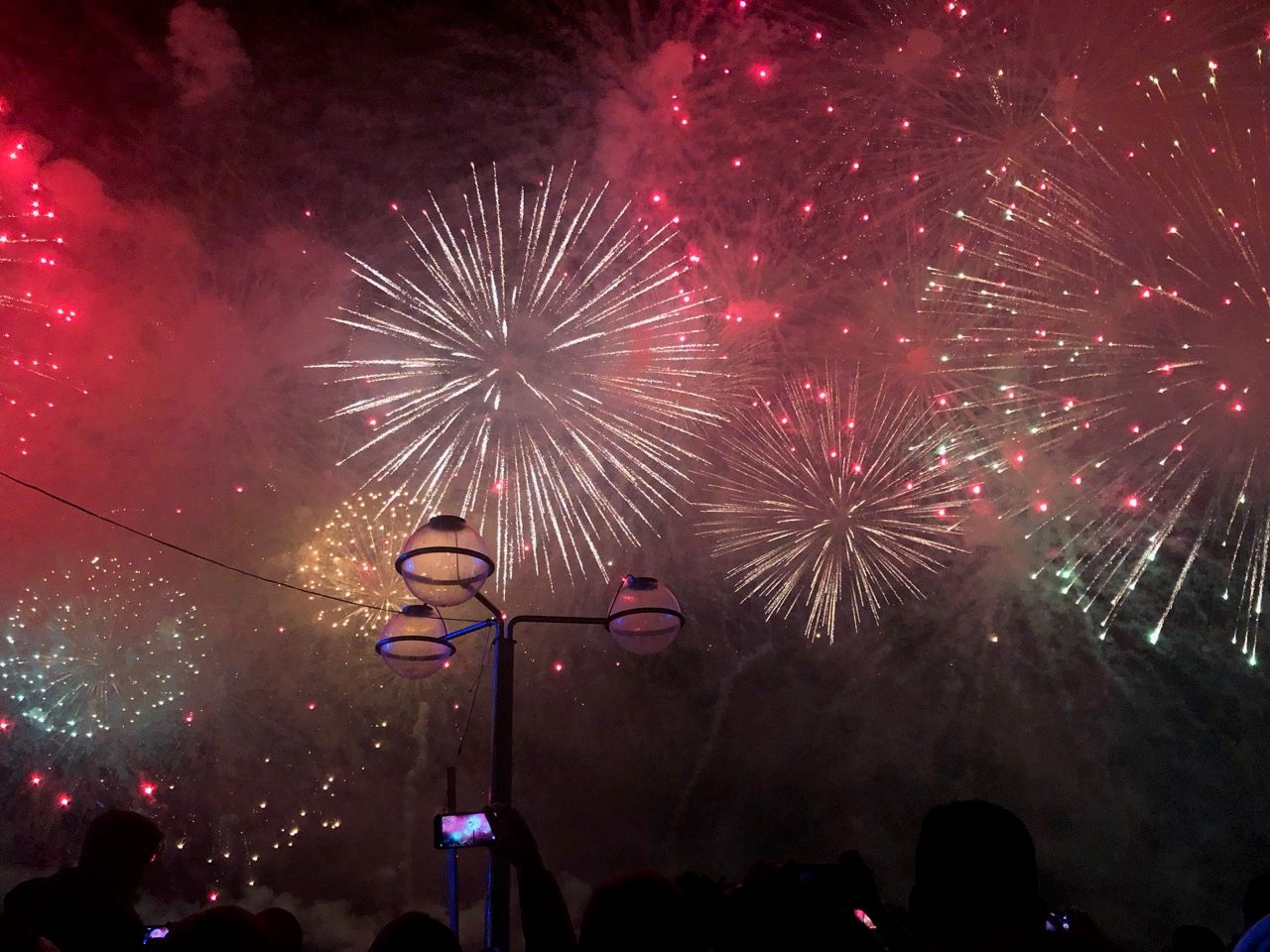 After our work in the boatyard was complete, we decided to hang out until Carnaval, the pre-Lenten festival; Mardi Gras is the most famous example in the United States. Mazatlán's Carnaval is world famous, one of the biggest. We were warned: Mazatlán is dangerous! Carnaval is full of pickpockets! Not safe for gringos (foreigners)! We had a wonderful time at Carnaval, and throughout the nearly two months we spent at Mazatlán. We saw one elderly man who was stumbling drunk and being supported by a friend. Another time, two guys stopped and clearly checked me out in an appreciative manner for a couple minutes. And that's that for danger. There were young folks in groups; they were often friendly and excited to practice their English (always better than our Spanish, though we are practicing daily and improving). There were couples. There were mostly families: with folding chairs for their elders, babies held close, toddlers and kids dashing about gleefully. The energy was warm and celebratory. It felt safer than every American music festival I've been to.

Saturday night was the Burning of Bad Humor. We went up early and were delighted to walk into Hector's Bistro, which many call the best restaurant in town, and get a seat for 7 without a reservation. James and I were in the fine company of Suzana and Harry of SV Gardyloo, Rosalind and Don of SV Ramble on Rose, and Larry of SV Wild Spirit. While we didn't meet until the Ha-Ha, all three of us kept our boats in Richmond on the San Francisco Bay before this fall! Gardyloo and Ramble on Rose were at Marina Bay Yacht Harbor with us, and Wild Spirit was at the Richmond Yacht club next door.

After a delicious meal with cocktails and then coffee cocktails we walked over to the plaza where the Burning of Bad Humor was to take place, at Olas Altas, which we had scoped out the day before. We arrived early and got a great spot right in the center. Later, this big plaza will be entirely filled with people.

Each year, something is burned in effigy in a ritual of cleansing and renewal. This year it was former Mexican president Enrique Peño Nieta, in honor of his reported corruption. The effigy is paraded through the streets and then burned. Notice how chill the energy is in these videos; everyone is happy, eating, enjoying.

After the Burning of Bad Humor comes the fireworks. OH MY GOSH, THE FIREWORKS! The show is called The Naval Battle or The Naval Combat, and is a reenactment of the 1864 battle between the city of Mazatlán and attacking French ships. They were the best fireworks any of us had ever seen, and Rosalind considers herself a connoiseur of fireworks. There were fireworks coming from the left and right sides of the plaza and from boats out on the harbor. The colors and shapes were incredibly varied, and there was grand, booming musical accompaniment, plus a dramatic narration of the battle.  Oh, and of course: lasers! None of us had ever seen fireworks so low; every few minutes there would be this odd little rustle through the crowd as we'd all drop our heads in unison to brush the falling ash off of our faces and hair after a particularly close arc. I could barely begin to capture this in photos or video because the explosions were coming from either side of us and out on the water. It was extraordinary.

After the fireworks, the 50,000 people who had showed up wanted to leave, pretty much all at once. This was the tricky part. I've never been in quite such a tight crowd, and I've been to the Kumbha Mela. We shuffled along, arms pressed to our sides, taking teeny tiny steps. When we passed over curbs, each person would turn and warn the person behind them since the step could not be seen. It was very calm. Everyone was focused and pretty patient. There was an animal part of me that felt rather panicky, but thank goodness for meditation inside and mellow people. It all went fine.

After we got out of the plaza, every possible form of transit was overflowing. We couldn't get a bus, or a taxi, a truck, or a pulmonia (a charming local form of transit, sort of like a very fancy golf cart.) Larry had seen this coming and nipped off early. Suzana and Harry decided to try walking in a direction that looked promising to them and trying a rideshare app. It was late, our feet were sore, and we were about 4 miles from our marina, but Don and Rosalind and James and I set off on foot. We got all the way down the Malecón (embarcadero, waterfront street), which had been covered with huge, gorgeous statues for a couple of weeks.

At last we began to run into vehicles that were returning from dropping their first round of passengers off. One form of transit in Mazatlán is descended from horse-drawn carriages: red pickup trucks called aurigas whose beds are roofed and lined with benches. The trucks and pulmonias both blast music to entice riders, which makes the streets festive on even an average day. Tonite they were booming; people were dancing in the streets all over. A red truck pulled over near us and everyone close by dashed toward it. Usually a carriage-truck picks up one party, but this one took as many people as it could fit; there was a group of four, another group of six, and the four of us. We were snugly packed, and I had only half a cheek on the bench, but we weren't walking, and everyone was grateful.

The driver wisely peeled off of the Malecón, which was so busy that we had been walking faster than the traffic, to zip along quickly. We zipped right through a puddle. While riding in an open truck. The spray was fetid. Everyone squealed, then groaned, then laughed in unison as the stink went up around us. I was seated at the rear and took most of the spray. It's a special time when you find yourself thinking hopefully that perhaps that was cow manure and not human sewage waste? (It was probably human.) My body still knows exactly where the biggest drops landed on my lips. I had a very long shower. I took some charcoal tablets. And now I have this great story! I do not have my best dancing scarf. Goodbye, twinkly gold scarf who did not survive being washed; you were a delight. So glad you had such a magnificent final night.

In sum: THAT WAS INCREDIBLE. Good friends, explosions, ashes, shit, and all.

The Loss of a Foremother

Today I sing for Carolee Schneeman, the glorious, ferociously incarnate, brilliant artist, who has left her body at the age of 79. "I guess my best advice is this: Be stubborn and persist, and trust yourself on what you love. You have…

We're at our first marina that doesn't have washing machines. Turns out there are no public washing machines in the little town of La Cruz! You wash things at home or send your laundry out. Most cruising sailors in Mexico send their…