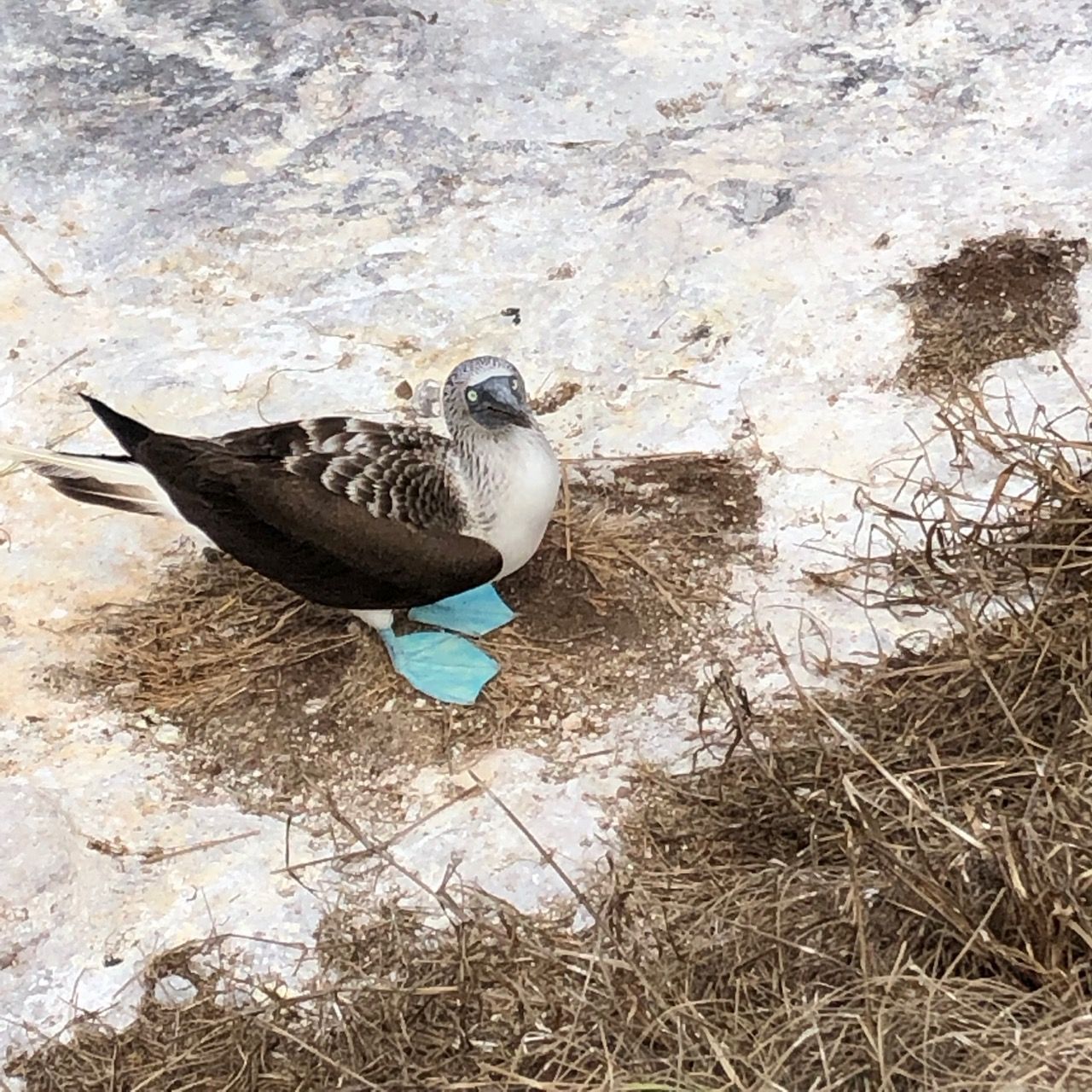 Isla Isabel (also called Isla Isabela) is a small volcanic island, a little over a mile square, and about 45 miles from the nearest port. Often called the Galapagos of Mexico, and famous for the documentary that Jacques Cousteau made here, this little island is a National Park and a UNESCO World Heritage Site. Other than a small row of fishermen's shacks and a small scientific campsite, the island is uninhabited by humans. It is heavily inhabited by birds, who have no natural predators here, and therefore do not startle easily. You can walk among the thousands of nesting Magnificent Frigatebirds and Blue Boobies (No, I'm not making those names up!) like any other animal. Doing so was one of the most beautiful experiences I've had.

Being volcanic, Isabel is rocky and hard to anchor at; it's said more anchors are lost here than anywhere in the Gulf of California / Sea of Cortez. Best practice is to run a trip line, a second anchor line with a float that marks your anchor, so that you have another angle to pull from if your anchor won't come out of the rocks. (Note on anchoring at the end for cruisers.) There's very little protection from wind or waves, and... well, usually boats anchor on shorelines. This is really almost anchoring in the open sea. Some folks consider it day trip only and won't spend the night; many do not attempt to anchor here. It's a definitely a fair-weather-only destination, and as we headed south from Mazatlán, it was absolutely vital to my beloved that we go here. James, you see, has developed a passion for birds.

We planned to leave Mazatlán for three days running. On the first, the sea conditions for anchoring our first night at Isabel looked a little too strong (when we look at "weather", we look not just at the atmospheric aspects common to land folks, but at the sea state; there are forecasts for the size, frequency, and direction of the waves, too!) On the second day, there was a red flag up on the channel, meaning that the wind was strong and kicking up waves which led the Port Captain to declare the channel unsafe for departure. We used the extra day to visit El Faro, the beautiful lighthouse we had not yet made it to. Finally, on the third day, we were able to leave. We headed out in the afternoon for a glorious overnight trip; the full moon was up almost all the hours the sun was down. It was a great journey; a sweet sail until the wind died around midnight, and then an easy motor.

Our first solo overnight! We had crew for overnights on the way to Mexico, and a buddy boat when we crossed the Gulf a few months ago. We now know that overnight sails, which terrified me at first, are a favorite of ours. We landed at Isabel a bit after dawn, happy and tired, anchoring just behind our dear friends Bruce and Alene of SV Migration; they'd come down from the other side of the Gulf and we were meeting here to play before they head off on the Pacific Puddle Jump. We inflated our dinghy, picked up our friends, and headed in to the island for a first hike. There were frigates nesting all over as soon as we landed, and we hiked up a hill where the boobies were showing off for each other.

That night, Migration had us over for dinner. We'd spotted another boat we knew pulling into the anchorage that afternoon; Kelly and Dave on SV Arctos, who we'd been in Morro Bay, California and La Paz, Mexico. Kelly and I had first met online, and she'd kindly offered some advice about port entrances when they were a few ports ahead of us. They're amazing folks; she's a pilot and he's a nurse and paramedic. If you get injured in Alaska and need to be medevaced, Dave would keep you alive while Kelly flew you to Seattle. Super chill and super capable people, and devoted surfers. Migration had us all over for dinner, and when we woke in the morning, Alene and Bruce were gone, off to Banderas Bay for final preparations for the Puddle Jump.

We spent a day at anchor, catching up on sleep after the night passage, doing some boat care, and chilling out. A whole bunch of boats had moved around the corner from the south, rollier anchorage to the east, smoother one we were in, and it turned out that we knew Eric and Morgan on SV Zephyr from the Baja Ha-Ha, Mike and Katie on SV Allegria were our across-the-dock neighbors at Marina Bay Yacht Harbor before we left San Francisco, and there were two more surfer boats who were buddying with Arctos. Zephyr is a huge catamaran, and they kindly had us all over for a potluck that night, with a centerpiece of grilled fish caught with a speargun that day. Most of the folks on boats out here cruising are retired, and it was fun to hang out with a group of people where we were the oldest instead of the youngest!

We were blessed with a good spell of clear weather and spent 5 days and 4 nights here at Isla Isabel. Stay tuned for my next post, about our exploration of the waters and the much-closer-return of that mama humpback and her baby!

Anchoring and Hiking at Isla Isabel

The south anchorage is where you need to land your dinghy to hike, but it's much rollier than the east. In the east anchorage, it appears that there is sand in places, but it's a thin layer over rock; best to assume you're always anchoring in rock there. We used a trip line with a float; almost everyone did and we were glad for it; it made fitting closely feel safer. We had as many as six boats in the east anchorage, one a huge catamaran and one a huge trimaran. We didn't need it to retrieve the anchor, but the option was good to know we had. Diving your anchor is strongly recommended, great gratitude to Dave on Arctos for doing so for us! We'll be taking the free diving classes you recommended, for sure.

The hike that takes you past the crater lake and to Las Moñas starts BEHIND the fishing shacks. You have to walk between them. I know, it feels rude; everyone tries going around, but the head of the trail is not at the end, it's behind the middle of the row. In 2019, there was a building with the number 13 spray-painted on it, and some flat concrete on the ground between it and the building next door. I decided that might be a path, and I walked through. The fishermen did not volunteer aid, but they were friendly when we where, smiling warmly. The crater lake path is marked with orange plastic ties wrapped around trees, and goes uphill quickly from behind the shacks. Super clear once you are on it; easy to follow. At the lake, the Las Moñas trail starts down low by the shore of the lake if you want to get onto it, and it is marked by blue ties.

The boobies are up on the hill with the tower, a brief, steep hike off to the left after you land your dinghy, and they are on the beach facing Las Moñas if you take the east trail. The frigates are all over.

It's all the Same F*cking Day, Man

I hadn't had more than three weeks without work (except for 2 surgical recoveries) since I was 16 years old until I stopped teaching just before we left San Francisco last fall. That's 32 years of work. For 23 of those years,…

Come, dip your toes in the waters of your existence. Rinse your heart in the light of the stars. Remember the way to the refuge that lies within you, holding wells of strength, courage, and solace.…